Australia is a member of the International Atomic Energy Agency (IAEA), which sets international standards for safely managing radioactive waste.

What is radioactive waste?

Radioactive waste can be classified into three main categories - low, intermediate and high.

Ninety-two per cent of the radioactive waste produced by ANSTO is low-level waste, made up of paper, plastic, gloves, cloths and filters which contain small amounts of radioactivity.

This waste is shredded and compressed into 200 litre drums, which are safely stored on-site. The radioactivity is measured using a scanning system.

The drums are bar-coded and the radioactive content of each drum is entered into a database to ensure that the waste is safely, securely and efficiently managed in compliance with the standards set by the IAEA and the Australian regulator ARPANSA.

High-level waste has higher levels of radiation which requires increased shielding and isolation from human contact and requires cooling due to its heat-generating capacity. It is produced from the operation of nuclear power plants. No high-level waste is produced at ANSTO.

The diagram below provides a simplified flowchart of the waste products resulting from the production of nuclear medicine at ANSTO. 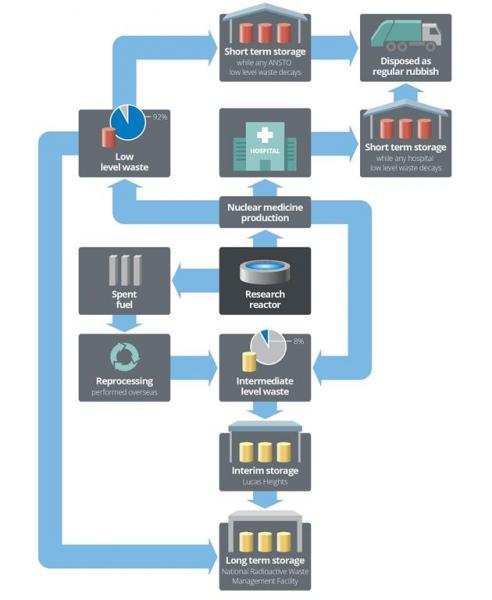