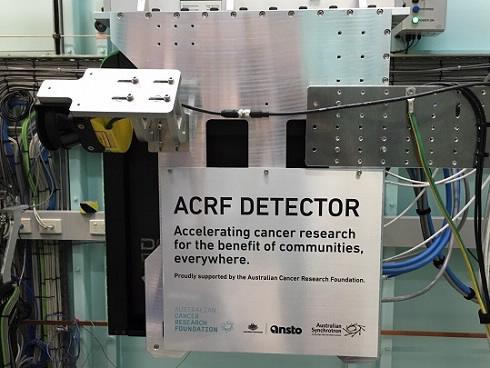 Australians with cancer will be the first to benefit from the multi-million dollar Australian Cancer Research Foundation (ACRF) Detector launched today at ANSTO’s Australian Synchrotron, fast-tracking cancer research by harnessing light a million times brighter than the sun.

Minister for Industry, Innovation and Science, Senator the Hon. Arthur Sinodinos, today unveiled the ACRF Detector, which is akin to a turbocharged camera, and will take images at a speed and accuracy currently not possible at any other Australian research facility.

The detector will enable researchers, including those working in cancer, to more than double their outputs, gaining more answers at a faster rate.

Currently, more than 60 per cent of all the research conducted on the Synchrotron’s Micro Crystallography (MX2) beamline is dedicated to cancer research, helping scientists to understand and develop new drug targets and refine treatments for a disease that is the leading cause of death around the globe.

ACRF CEO, Professor Ian Brown, said ACRF and its supporters are proud to have provided the $2 million grant that facilitated the purchase of the ACRF Detector.

“The ACRF Detector is a vital, core piece of equipment for cancer and medical research in Australia, and one that will be used by cancer researchers from all institutes, hospitals and universities,” said Professor Brown.

“It shows the three-dimensional structure of proteins, which do most of the work in cells, identifying opportunities to neutralise those involved in cancer and promoting those that may protect us from cancer.”

The Synchrotron is operated by the Australian Nuclear Science and Technology Organisation. Australian Synchrotron Director, Professor Andrew Peele, said the leaps that will be enabled by the new detector will more than double the facility’s capacity to collect data, leading to more targeted and effective treatments and, ultimately, improved patient outcomes.

“This new capability will take a beamline that was previously at full capacity – booked for use at all available hours of the day – and find it an extra gear, so it can deliver more research, and arm researchers with clear representations of protein structures,” said Professor Peele.

“There are a lot of questions that still need to be answered in the world of cancer research, and by partnering with ACRF and speeding up the throughput of important research, we are bringing more solutions closer than ever before.

Senator Sinodinos said the new ACRF Detector is a great example of how collaboration between research facilities, not-for-profits and government can improve outcomes for the Australian community.

“This investment in Australian research and technology has the potential to increase and quicken the rate at which research turns into practical applications for patients and the community,” Senator Sinodinos said.

“High quality research, collaboration and smart investment are needed to ensure that new research and knowledge are supported, and I am thrilled to be here today to witness exactly that, and officially reveal the ACRF detector.”

Attending the launch of the ACRF Detector with Minister Sinodinos was researcher and protein crystallographer from the University of Western Australia, Professor Charlie Bond, who has utilised the MX2 beamline for extensive protein analysis, including research into the childhood cancer neuroblastoma.

They were also joined by Lucy Jones, who is focused on driving change in survival rates through increased research into neuroblastoma, having lost her daughter Sienna to the illness in 2010.

“Losing a child to neuroblastoma has driven me to do all I can to support research in finding an effective treatment for this insidious disease and other childhood cancers, made all the more challenging due to the high cost of drug development and the rarity of most childhood cancers,” Ms Jones said.

"We must do everything we can to help researchers such as Professor Bond, and innovative technologies such as this, to help make the whole research process more efficient by reducing costs and time to clearly benefit the research of childhood cancers and other diseases, shortening the time between lab discoveries and clinical testing of new drugs,” she said.

Neuroblastoma occurs most commonly in infants and children under five years of age. It is cancer made up of cells that are found in nerve tissues called neuroblasts, commonly found in adrenal glands and along tissues around the spinal cord in the neck, chest, abdomen and pelvis.