Key to ANSTO’s food science research is exploring the relationship between structure and function.

Using neutron scattering and a range of other analytical techniques, food scientist Yaiza Benavent Gil (below right) has spent three months at ANSTO investigating how the structure of starch is changed by chemical treatment and how those changes affect its properties.

Benavent Gil, who works at the Institute of Agrochemistry and Food Technology (IATA) in Valencia, Spain and is completing her PhD, has analysed the functional properties of starches that become porous when modified by an enzyme.

Porous starches, which have holes and openings, are digested more slowly by the body and hence have a lower glycaemic index (GI).

Foods with a low GI do not cause a spike in blood glucose levels, which is an important consideration for diabetics and can help prevent disease.

“Yaiza investigated starch structure all the way from the sub-nano to micron length scales”, said Professor Elliot Gilbert (below left), who leads the Food Science project at ANSTO. 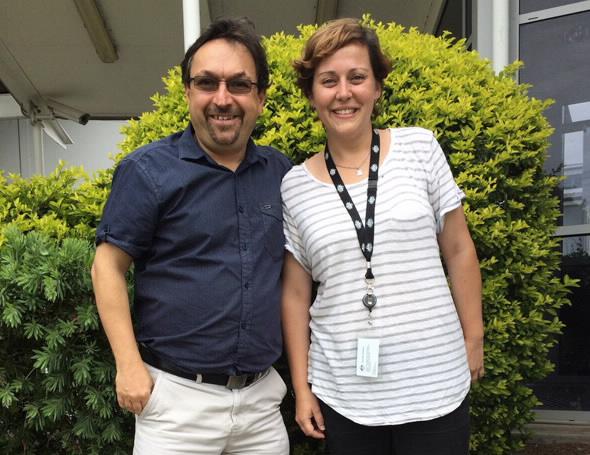 Gilbert has a longstanding collaboration with IATA, which commenced in 2005, on supervising his first postdoctoral fellow to the project.

Another food research scientist, Dr Marta Martinez-Sanz, spent three years at ANSTO investigating another carbohydrate, cellulose, which is common to plant cells such as fruit and vegetables.

“There is enormous interest in both the supply and quality of food to ensure good health in both the developing and developed world,” said Gilbert.

“Neutron scattering is a powerful tool for the study of soft matter of which food forms an important class of materials. It can bring insights into food at the meso- and nano-scale under realistic processing conditions relevant to industry and contribute to the development of new products,” added Gilbert.

The fifth international Neutrons and Food conference will be held in Sydney mid- October.

The primary goal is to bring together the community of food scientists and materials scientists to address the most significant challenges in food.

“With neutron scattering remaining at its core, we also wish to extend and showcase nuclear-based techniques more broadly and how they are increasingly being used,” said Gilbert.