Dr Catalina Curceanu, is Senior Researcher at the National Laboratories of Frascati, INFN (Italy) who leads a group of researchers performing experiments in nuclear and quantum physics to answer questions about exotic atoms and impossible phenomena, will deliver a Distinguished Lecture on Strangeness physics and quantum mechanics with radiation detectors: exotic atoms studies and impossible atoms hunting at ANSTO on 11 September at 11am and a special sessions for students/public at 6:30pm at the Sutherland Library. 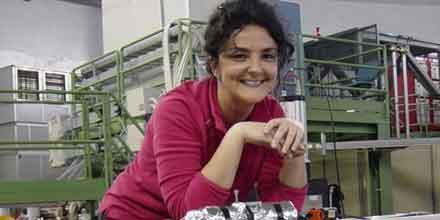 This highly awarded researcher, who has been recognized internationally will describe accelerator based- experiments that make use of advanced radiation detectors to measure X rays generated in the de-excitations of exotic atoms and the hunt for “impossible atoms”, at the Gran Sasso underground laboratory.

“Our studies have a strong impact in nuclear physics in the strangeness sector and astrophysics, as well as in fundamental physics with tests of quantum mechanics,” said Dr Curceanu.

Her presentation will explore how light kaonic exotic atoms are produced and how unprecedented precision measurements have been made in the SIDDHARTA experiment at the DAFNE Collider at the LNF-INFN laboratory, Frascati (Roma, Italy), combining the excellent quality kaon beam delivered by the DAFNE collider with fast and very precise Silicon Drift Detectors.

“Our effort will contribute to unlocking the secrets of the strong interaction in the strangeness sector and to understand the role of strangeness in the Universe, from nuclei to stars (neutron stars).”

The presentation will also include highlights of the VIP experiment at the LNGS underground laboratory, hunting “impossible atoms”, such as atoms prohibited by the Pauli exclusion principle.

The search for the spontaneous radiation as a signal of collapse models that have been proposed to solve the “measurement problem” (Schroedinger’s cat paradox) and put forward the idea that similar experiments could be performed in the underground laboratory under construction in Australia.

In a second more general talk for the general public and students at 6:30pm, Dr Cauceanu will present: 7 Mysteries of Modern Physics: from dark matter to parallel universes and answer the question, ‘After the discovery of the Higgs boson and the measurement of the gravitational waves is there anything important yet to be discovered in fundamental physics?

She will present and discuss seven major unsolved mysteries of modern physics, showing that there are still many fundamental challenges we are facing in science, in particular in physics. The topics span dark matter and dark energy, to the mysterious black holes and the still unknown intimate structure of a neutron star.

Dr Curceanu will introduce the zombie-like Schrodinger’s cat paradox of quantum mechanics, and end with something we know that exists, but do not know how much it is: the neutrino masses, and with something else we do not even know if it exists: parallel Universes.

“This is the best moment to study science!”

Dr Catalina Curceanuis is the spokesperson of the SIDDHARTA-2 collaboration, and of the VIP collaboration testing quantum mechanics at the Gran Sasso underground laboratory in Italy. Author of more than 300 peer reviewed articles, Catalina is member of the Foundational Questions Institute (FQXi). She won various awards and prizes, among which the 2017 Emmy Noether Distinction of the European Society of Physics, the 2017 Vice-Chancellor Visiting Scientist International Award from the University of Wollongong (Australia) and awards from the John Templeton Foundation and from the Foundational Question Institute (FQXi) for projects on quantum mechanics.