Elastic Recoil Detection Analysis (ERDA) is a complementary technique to Rutherford Backscattering. It is used principally as a method for measuring hydrogen in thin layers, and in the near-surface region of materials.

In this technique, an incident ion beam is directed at a grazing angle onto the sample's surface. In the ensuing binary collisions with the sample?s constituents, recoiling atoms are ejected and are detected at a forward angle.

A thin filter, typically mylar, is placed in front of the detector to stop and block-out the elastically scattered incident ion beam, which would otherwise overload and quickly destroy the detector. Atoms with a mass lighter than that of the incident ion beam will pass through and be detected.

The ready availability of low energy helium beams from small accelerators quickly made ERDA a popular technique for the determination of hydrogen in solids, and studies of polymer interdiffusion.

This, however, can be done using a somewhat more sophisticated technique called the Recoil Time-of-Flight spectrometry (RToF).

Studies of the hydrogen content and profiles of surfaces can be difficult in some cases, due to the pickup of atmospheric moisture by the sample causing an unwanted hydrogenous background.

By using deuterated compounds, the ERDA technique can differentiate between these two isotopes of hydrogen and so provide an increased sensitivity. Such has been the case in leaching studies of SynrocC at ANSTO.

ANSTO Synroc is a titanate ceramic designed for the immobilisation of high-level radioactive waste from reprocessing of spent nuclear fuel. The ceramic is very leach resistant in aqueous media, but this leach resistance makes it very difficult to study the detailed mechanisms of aqueous dissolution.

Typical leach rates in water of the more soluble waste fission products and the matrix ions are less than about 0.1 g/m2/day at boiling water temperatures. The leach rates themselves decrease with leaching time so that after more than a year at a temperature of ~ 150°C, only a fraction of a micron of a Synroc surface is altered.

The entry of Synroc ions into aqueous media, however, is not the only process taking place during dissolution. Hydrogen ions can substitute for cations by ion exchange processes, and the anhydrous Synroc phases may hydrate or hydroxylate.

With these very low leach rates, the ambient hydrogenous background can easily mask out surface alteration effects. However, the use of heavy water (D2O) rather than normal water H2O for leaching Synroc provides an unambiguous signal in ERDA measurements. 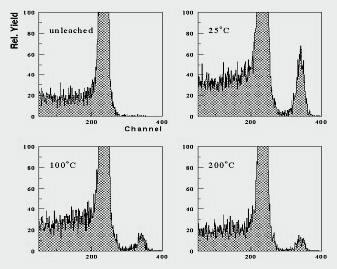 Figure 1 shows ERD spectra for SYNROC leached for 5 days at 190°C after oven drying at 25°C, 100°C and 200°C, with an unleached sample for comparison. The H and the D peaks are centred at channel numbers of about 230 and 340 respectively

The difference in deuterium content after drying at lower temperatures presumably reflects weakly sorbed D, while that surviving at the higher temperatures probably represents deutroxylated species. The large hydrogen surface peak was not much affected after the drying, but atmospheric recontamination could not be avoided.

A calculation of the depth penetration and abundance of D in the sample dried at room temperature resulted in a best fit of 0.6 at.% being uniformly distributed to  a depth of 15 nm.

NRA technique at ANSTO has also been applied in a variety of other studies, such as the manufacture of amorphous hydrogenated silicon solar cells, and segregation in deuterated block copolymers.