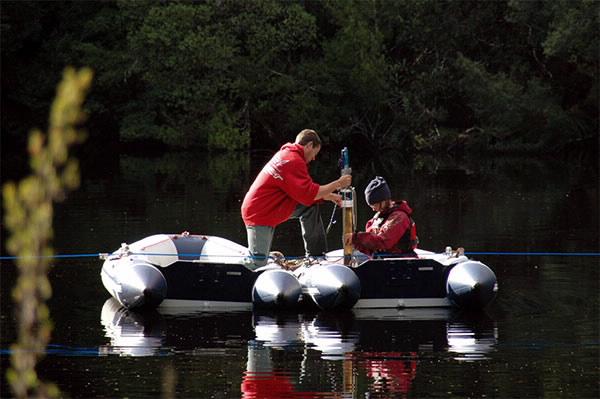 A temperature record based on sediments from a lake in Tasmania collected by ANSTO environmental researcher Dr Krystyna Saunders is among the global, multiproxy dataset published by the Past Global Changes (PAGES) Consortium in Scientific Reports.

The undertaking was initiated and coordinated by PAGES, a core project within Future Earth, and took three years to complete. It is the most comprehensive collection of information on global temperature change over the past one to two thousand years.

Investigating the patterns of past climate variability from natural climate archives, which include tree rings, corals, glacier ice, and marine and lake sediments, will enable scientists to more accurately study the patterns and causes of surface temperature changes than was previously possible.  Researchers rely on these archives that reflect past climate variability for the period before instrumental records began.

Saunders is one of 98 regional experts from 22 countries in the PAGES consortium who contributed to this effort. Together with collaborators from the University of Bern, Switzerland, and British Antarctic Survey, United Kingdom, Saunders published a 950 year temperature reconstruction based on the biogeochemistry of sediments from Duckhole Lake in Tasmania.

Saunders congratulated her collaborators on the painstaking and difficult task of reconciling 692 proxy records from 648 sites worldwide to produce and interpret the collection, which can be used to help understand and quantify processes that cause climate to change.

Other Australian researchers from the Universities of Tasmania, Melbourne, Adelaide, the Australian National University, University of New South Wales and Australian Antarctic Division contributed records and assisted with their compilation and analysis.

The authors use a variety of approaches to summarise the primary features of temperature history and summarise global trends by average values of the individual records.

The summaries show a long term cooling trend until the 19th century, which was followed by a sharp warming.

Analysing the response of climate to factors that caused it to change provides essential information about the feedback processes that amplify or dampen changes in climate at regional scales.

PAGES has also provided new and freely available computerised tools to analyse the data, which will allow climate scientists to more accurately study the pattern and causes of surface temperature changes at regional and global scales that previously possible.

The authors point out that the natural archives are used to infer past temperatures but are not thermometers and large uncertainties about past temperature variability remain, especially during the first millennium.