To coincide with National Science Week and the education focus on Destination Moon, we are sharing highlights of our planetary science research.

ANSTO receives all sorts of unusual objects and organisms for scientific investigation using its instruments. Researchers at the Australian Synchrotron are currently collaborating on a particularly rare, other-worldly sample: a lunar meteorite.

“Although we do work on the moons of the outer planets, I believe this is our first sample from Earth’s moon, which could be more than four billion years old,” said Dr Helen Brand, planetary geologist and senior beamline scientist at the Australian Synchrotron.

Lunar meteorites are rocks found on Earth that were ejected from the Moon by the impact of an asteroid or another body.

“These objects, which originate primarily from the moon’s crust, are extremely rare and precious. Because of their scarcity, scientists often use analogues or man-made versions of meteorites for investigations.

“At the moment it is quite exciting as I have two projects relating to actual and analogue lunar objects, both of which are scheduled for the Imaging and Medical Beamline at the Synchrotron,” she said.

Lunar meteorite
“I am working with a colleague, Dr. Natasha Stephen, who is the director of the Plymouth Electron Microscopy Centre in the UK, to obtain a high resolution three dimension-X-ray CT of the meteorite before it is examined with other techniques.

“Having the tomographic data allows you to put the detailed structural and chemical information that you get from other techniques such as Scanning Electron Microscopy or Electron Backscatter Diffraction into context. 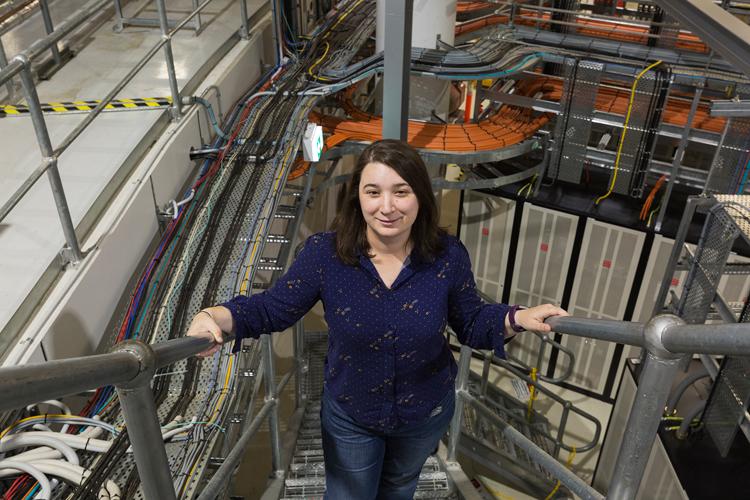 “The technique is also non-destructive, which means the structure and features of the meteorite are preserved after imaging in the X-ray beam.

“There is also the possibility it will reveal interesting features that require further exploration,” explained Dr. Brand.

Dr. Brand is a passionate planetary scientist, who has carried out award-winning work on jarosite, a mineral found on Mars and Earth, studies the icy minerals of the moons of Jupiter, geological processes on Pluto and makes an annual trip to South Australia to collect meteorites.

Although much of her work is undertaken on the powder diffraction beamline, she has used IMBL and other instruments at both the Australian Synchrotron and the Australian Centre for Neutron Scattering in her work on planetary bodies.

Lunar analogues
The second collaboration is with the European Space Agency and the University of Kent (UK), and involves 3D imaging of analogue impact craters which are models for lunar impact craters and are produced when blocks of material are struck by high-velocity projectiles.

My colleague at ESA, Dr  Dayl Martin is a research fellow at the ESA Sample Analogue Curation Facility and Dr. Kathryn Harriss at the University of Kent, uses a light gas gun to make impact structures. Dayl provides the sample and Kathryn makes the crater.

These impact craters can reveal important information about the surface processes that shaped the formation of a moon or planet.

“We believe this is one of the first X-ray tomography measurements of a large volume of experimental impact blocks,” said Dr Brand.

Brand was sent several blocks of material with small craters which will be imaged on IMBL.

“It enables us to analyse features both quantitatively and qualitatively, such as cracks and shock wave pressure effects, without damaging the sample.”

“We know hypervelocity events are the most common and dominant surface process on the moon and most airless bodies in the Solar System.  The effect of different projectiles on rock is poorly understood, as is the propagation of a shock wave through the rock.

“In addition to insights into lunar geology, it has the potential to gain insight into the processes that shaped the Earth,” said Dr  Brand.

Dr Brand is part of the Planetary Materials research at ANSTO where she works closely with other ANSTO researchers, including Dr Helen Maynard-Casely and Dr Jeremy Wykes, to investigate the properties and structures of new materials found on bodies throughout the solar system.

Dr Maynard-Casely is currently travelling around Australia for the Institute of Physics sharing how neutrons can be used in studies of materials, such as the outer planets and their moons.

Dr Brand recently delivered a public lecture on her work to more than 200 school children and 500 members of the general public, who all wanted a selfie with the lunar meteorite.