Latent fingermarks are generally described as those requiring some process to make them readily visible to the eye. These fingermarks are typically made up of natural skin secretions, along with contaminants (such as food or cosmetics) picked up from various surfaces.

The detection of latent fingermarks is often crucial in forensic investigations, but this is not always a straightforward task.

“We know that there are issues in detecting fingermarks as they get older, and also under certain environmental conditions”, said Lewis, whose main research focus is forensic exchange evidence.

“In order to improve our ability to detect fingermarks, we need to understand the nature of fingermark residue, and this includes both the organic and inorganic components. Many chemical components in fingermark residue are present at very low levels, and we don’t know how they are distributed within the fingermark. This is what took us to the Australian Synchrotron.”

To date, most fingermark research has largely focussed on the organic material in residues. Consequently, a gap in fundamental knowledge exists when it comes to inorganic components such as metals. 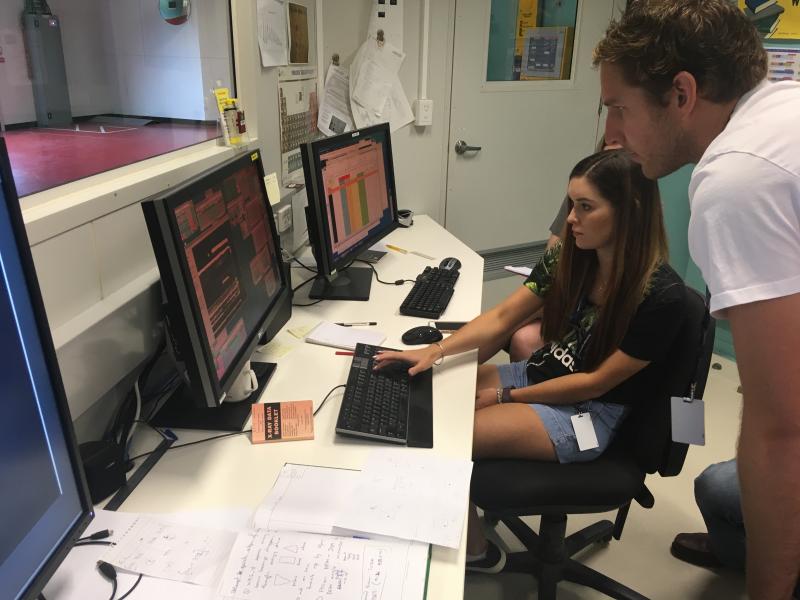 Curtin PhD student Rhiannon Boseley sets up a scan on XFM under the careful eye of Dr Mark Hackett. This research is part of her PhD project “Recovery and Enhancement of Fingermarks and other Physical Evidence: Towards Improved Protocols for Crime Scene Investigation."

“Our purpose in using X-ray fluorescence microscopy was to determine if there were inorganic components present in the fingermark that we could use as a target for detection techniques, or to better understand how our current detection methods are working,” said Lewis.

“XFM can detect elements with spatial resolution at sub-micron length scales directly and rapidly. Importantly, it reveals the location of elements within a sample, which is valuable in forensic science and a range of other disciplines,” said Dr Daryl Howard, XFM Instrument Scientist, who assisted with the measurements.

Dr Mark Hackett, who is an expert in mapping metals for health and bioscience applications, said,  “We have been able to use X-rays generated by the synchrotron to study how trace amounts of metals and metal ions can be transferred to a fingermark due to handing everyday items that range from coins to cosmetics. Further, we can use the synchrotron to determine the identity of the metals or metal ions, to differentiate between those that do and don’t originate in the body. “

“I was truly surprised at the amount of metals from external sources, that we appear to carry on our fingertips” said Hackett. 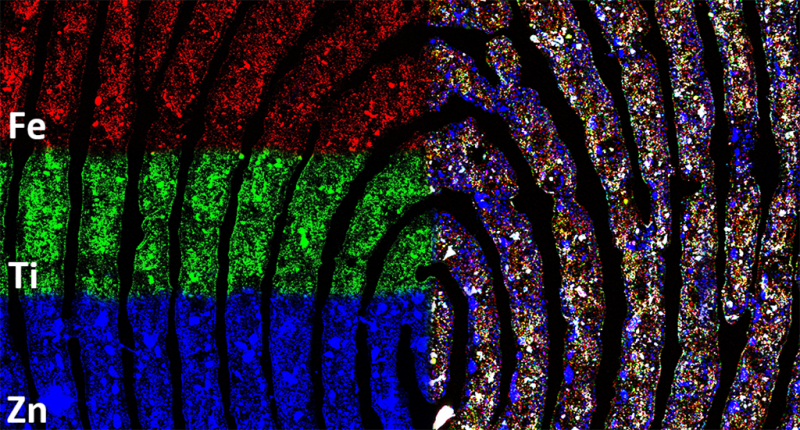 Because the presence of metals can impact detection of latent fingermarks, the investigators were interested in their concentration and location within the residue.

The findings open up the possibility of understanding why fingermarks from some individuals are more easily detected than others, and this information could be used to improve detection methods.

“Our most spectacular image captured the element titanium on one fingermark, which really lit up the fingermark. Titanium is commonly used in face make-up, and even after being rinsed with water, the element persisted. This may have significance in relation to the longevity and detectability pf such impressions,” said Lewis.

The researchers also tried washing fingermarks for 30 minutes before XFM imaging to see what effect this might have on the residue, as detecting fingermarks on wetted surfaces is known to be challenging. Following immersion in water, elements were leached out of the sweat component of the residue, but preserved in the oily matrix.

Drs Mark Tobin and Pimm Vongsvivut assisted with infrared microspectroscopy measurements at the Australian Synchrotron, which was used to reveal the distribution of organic components of fingermarks, such as the oily matrix or water-soluble organic material found in sweat. In particular, the combination of infrared microscopy and X-ray fluorescence microscopy revealed that water-soluble organic material also contained much of the inorganic material found naturally in fingermark residue.

In earlier work published in 2018 in Analyst, Dorakumbura et al characterised the highly variable and complex nature of the organic compounds in fingermarks. They used a type of infrared spectroscopy at the Australian Synchrotron, in combination with Raman microscopy at Curtin University, to directly and non-destructively image the numerous chemical components within fingermarks at the micron scale.

It also provided the first direct evidence that the chemical composition and distribution within fingermarks reflect water-in-oil and oil-in-water emulsions.

“We are not suggesting that routine application of synchrotron techniques for forensic testing is likely. It has however given us a greater understanding of the chemical complexity, transfer processes and persistence of material associated with latent fingermarks,” said Lewis.