Developments in radon measurement technology by ANSTO researchers over the past decade have enabled an improved characterisation of the composition of air masses that have traversed the Southern Ocean for up to three weeks since last touching land. That’s about as clean as air can get!

It is now firmly established that the accumulated effects of long-lived anthropogenic pollution in the atmosphere, including carbon dioxide, methane, chlorofluorocarbons and fine particle aerosols, are contributing significantly to changing climatic conditions being experienced around the globe.

Our ability to measure recent climatic impacts, forecast future impacts, and estimate / predict the efficacy of emission mitigation strategies, relies critically upon our ability to accurately monitor the slowly-changing concentrations of these species in the cleanest air that can be found on the planet.

This is the air that is least affected by nearby sources of pollution because it has spent the longest time away from the direct influence of humanity; it represents the “baseline” against which global changes can be measured.

Unambiguous identification and characterisation of “baseline” air is the primary task of more than 20 World Meteorological Organisation Global Atmosphere Watch (WMO-GAW) stations at remote and high altitude locations around the world.

The Cape Grim Baseline Air Pollution Station (CG-BAPS) in northwest Tasmania is one of a small handful of “premier” WMO-GAW baseline stations, and has been operating since 1976.

In order to help distinguish between pure “baseline” air coming across the Southern Ocean and air that has had more recent contact with terrestrial (anthropogenic) sources from the Australian mainland or Tasmania itself, the atmospheric “trace gas” radon (222Rn) has been measured by ANSTO scientists at Cape Grim since 1980.

Radon is a naturally-occurring radioactive gas with a short half-life (3.8 days) which prevents it from accumulating in the atmosphere. Since radon is an unreactive, poorly soluble gas emitted almost exclusively from the land surface, it is an ideal atmospheric tracer for identifying air masses that contain even the smallest traces of recent anthropogenic pollution.

The ANSTO-built radon detector at CG-BAPS is operated by IER’s Atmospheric Mixing & Pollution Transport (AMPT) group as part of an ongoing high profile collaboration with the Bureau of Meteorology and CSIRO. This unique instrument is recognised by WMO as being the best (most sensitive) radon detector in the world for baseline atmospheric composition studies.

As a result of AMPT’s long history of research and development at Cape Grim, the current version of ANSTO’s radon detector is capable of reliably and accurately measuring radon concentrations down to 10 mBq m-3 on an hourly basis. This is equivalent to about 5 atoms per litre of air, or 1 atom in every 10E+23.

This extraordinary ability to measure radon at ultra-low levels is now allowing the analysis of baseline characteristics with a detail that was previously unobtainable.

The “traditional” baseline detection criteria used at Cape Grim have been based on a combination of wind (speed, direction and duration), aerosol density and radon.

The threshold radon concentration used within this definition has been 100 mBq m-3, which, due to the vast improvements over the last decade, is now an order of magnitude greater than the instrument’s detection limit.

The study found that a simpler and superior baseline definition could now be employed at Cape Grim that uses a lower radon threshold (around 50 mBq m-3) and completely discards the wind and aerosol criteria. 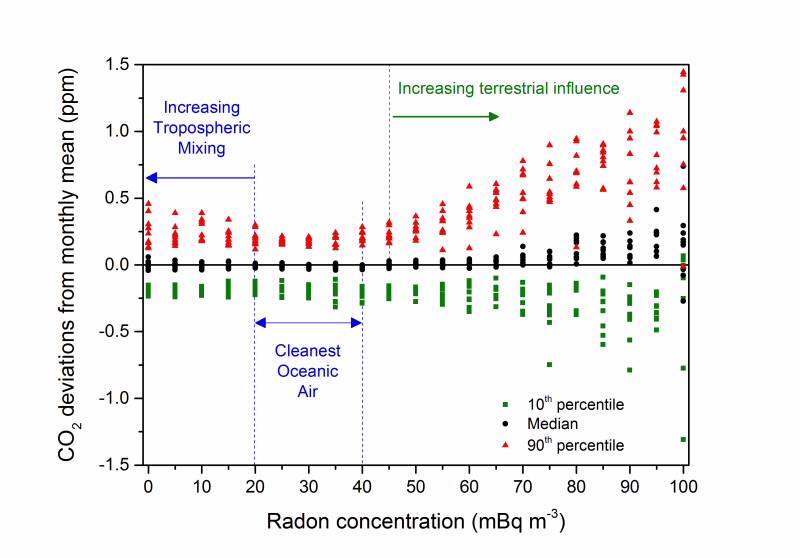 ANSTO’s unique technology for highly sensitive measurements of atmospheric radioactivity has established an international benchmark for precision and quality at these key WMO-GAW sites.