​​​​​When ANSTO environmental scientist Dr Craig Woodward noticed large pieces of charcoal on his balcony in the Sutherland Shire at the height of summer bushfires, it piqued his curiosity.

“It is well known among environmental scientists that the presence of large particles of charcoal which we usually find in wetland sediment samples means a local fire, that is, a fire less than 100 metres away,” said Woodward.

In a fast track report for the journal Holocene, Woodward and co-author Dr Heather Haines of the University of New South Wales documented the long-distance transport of this macroscopic charcoal from the large intense fires west of Sydney and its implications for the reconstruction of fire history.

The charcoal particles, which were classified between 2 and 5 centimetres in size after sieving, were being transported approximately 50 kilometres from the fire front in Western Sydney to the Sutherland Shire.

Woodward and Haines also found macroscopic charcoal particles on the cliffs above Cronulla beach, where large amounts of charcoal were washing ashore. 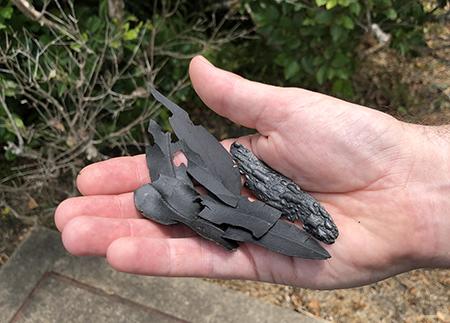 The longest documented cases of macroscopic charcoal transport in the literature previously was 20 kilometres from a fire in Montana in the US.

Using online fire location information from the bushfire directory, synoptic weather patterns and topographical maps, the researchers were able to determine how and why the macroscopic charcoal was being carried that distance.

Charcoal transport is a product of fire intensity, topography and wind velocity.

“You need to have an intense fire, such as we saw in the recent event, to generate the energy to produce the uplift of the leaves and bark,” explained Woodward.

Injection and the plume height are directly related to fire intensity. Particles that are lifted higher are transported further.

The weather conditions at the time, particularly the sustained westerly that was blowing and the wind speed were facilitating the movement of the particles.

“Winds of 90 kilometres an hour were recorded at the height of the plume at an altitude of approximately 10 kilometres,” said Woodward.

The topography of the country was another contributing factor.

The Sydney fires occurred at the edge of mountainous terrain, with relatively flat, undulating land to the east.

As there was nothing to stop the movement of the particles, such as elevated areas, they travelled further.

“And the other thing that is important when you talk about Australia is the type of particle. Unlike Canada where fires occur in conifer forests, in Australia we have eucalypts, which are consumed as fuel by the fire,” said Woodward. 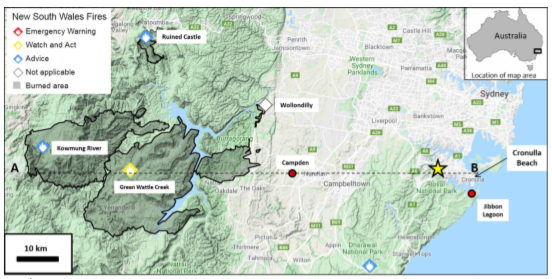 Location of the study site on the east coast of Australia. The map was extracted from the New South Wales Fire database and shows the status of fires and area burnt as of the 7 December 2019. The yellow star shows the location of the macroscopic charcoal study.

The charcoal that was found on Woodward’s balcony and the Cronulla beach was in charred leaf fragments and charred wood from eucalypts.

Certain types of vegetation are more likely to be transported. Because the long, flat surface of the eucalyptus leaf produces long flat particles with a large surface area, they are easily lifted and transported by convection.

“Charcoal particles are a major tool for me because they fall out and land in wetlands and lakes. I can use them to reconstruct fire and climate history in New Zealand and Australia,” said Woodward

“After using a variety of techniques, you end up with a record of how much charcoal has been deposited in that wetland, and if the charcoal particles are large you assume it is a local fire,” said Woodward.

“But after this study, we can’t really make this assumption anymore.”

Because intense fires like Australia experienced recently also occur in the US, Canada Kazakhstan, Africa and South America, the finding has global implications for how we reconstruct fire histories,” said Woodward.

The Australian Government has convened the country’s science organisations to develop a bushfires research strategy. 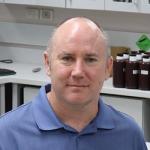