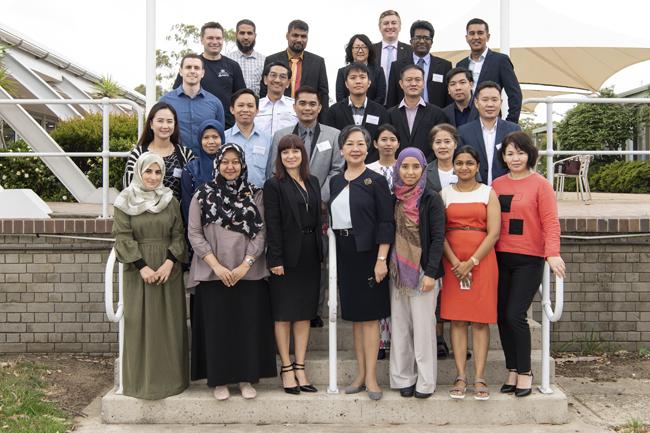 Twenty-five teachers from the Middle East and the Asia Pacific region completed a two-week training course at ANSTO which strengthened their understanding of nuclear science and technology to deliver effective and engaging teaching processes in secondary schools in their respective countries.

“This has been a wonderful opportunity to come together and share our experiences and expertise from across the globe. If we are to grow a more information generation of peoples who have a better understanding of all aspects of nuclear, then it is vitally important that our teachers are supported, : said Cassandra Casey, General Manager ANSTO Communications and Stakeholder Engagement and an IAEA Expert Advisor.

The course was conducted under the auspices of the International Atomic Energy Agency (IAEA) as a regional technical cooperation project.

A small team of IAEA representatives flew to Australia to contribute to the program, which was coordinated by Rod Dowler, leader, Discovery Centre and IAEA Expert Advisor on Communications and Education. These included Jane Gerardo-Abaya is the Director of the Technical Cooperation programs for Asia Pacific,  a risk and safety expert from Argonne National Laboratory in the US, Dave Grabaskas, and educators Roxanne Villanueva from the Philippines and Habibah Adnan from Malaysia.

In addition to a range of topics that covered nuclear science, radiation, radioactivity, nuclear technologies and nuclear accidents,  all participants took part in simulations to test their skills, prepared action plans and received accreditation at the conclusion of the program.

The training included tours of ANSTO facilities, which were led by Discovery Centre education officers and briefing by numerous ANSTO experts across the site.

Previous training workshops have been held in Indonesia, Jordan, Malaysia, The Philippines, Japan and the United States.