As a key part of ANSTO’s nuclear medicine project (ANM) nears completion, Principal Technical Consultant Michael Druce shares some personal insights on a journey that has led to the construction and pending operation of the world’s newest, state-of-the art Molybdenum-99 (Mo-99) manufacturing facility based in Sydney.

The story begins with a rough design sketch on a plane late in the year 2007 for a facility that will meet Australia’s current and future needs for molybdenum 99, the precursor of technetium 99m.  This radiopharmaceutical, the most commonly used nuclear imaging agent,  enables the accurate diagnosis of common diseases that affect, on average 1 in 2 Australians.  The story ends with an "advanced manufacturing facility"of the highest standard.

The project has not been without its challenges due to highly complex design process and construction of a facility that must meet all the requirements of a nuclear facility build and the Code of Good Manufacturing Practice (GMP). It is expected to be operational following a final approval from ARPANSA at the end of March 2019.

“The first stage and the most challenging aspect was the design and build. It was a custom build from our design, which was based on our existing production facility and access to processes from the South African company NTP Radioisotopes. “

“We looked at the way we do things and how they did and picked out the best features from both.  In the end we used their purification steps and addressed all the issues that we had with maintenance, access to equipment and longevity in ANSTO’s existing molybdenum production facility.”

The new Mo-99 manufacturing facility has a very complex design due to the multi-component production process, radioactive environment, management of waste streams and regulatory requirements.

The first step of extracting the molybdenum, known as the separation process, is undertaken in large hot cells using an industrial manipulator.

The manipulator ensures the safe and effective handling of a radioactive product that allows the operator to lift and manoeuvre the product naturally. Its design is based on many years of experience and engineering expertise.

The hot cells provide shielding that protects operators against any radioactivity that is present.  The next stage is a further purification process, undertaken in smaller hot cells, which removes any trace impurities from the active molybdenum.

A full production run is completed in approximately 26 hours and produces approximately 40 mL of product.  The new plant is expected to double the number of runs currently undertaken in the existing facility.

The molybdenum is then transported to the ANSTO technetium-99m production facility where it is added to generators.

The sterile Gentech® generator is a technology that enables nuclear medicine technicians to extract the technetium-99m from the container.

The overall process produces both low level and intermediate level waste as spent uranium fuel cups, liquids and gases. The waste is then contained and stored.

Ninety-two per cent of the radioactive waste produced by ANSTO, including the operation of the reactor, is low-level waste, such as paper, plastic, gloves, cloths and filters. These items contain small amounts of radioactivity.

“When our existing nuclear medicine facility became operational, we always had the vision that one day we would put in a replacement plant. The existing plant was only ever expected to meet domestic supply. The capacity of the original plant has been doubled to meet the global demand.”

Approximately 80% of the cost of the build is to meet local demand for nuclear medicine. ANSTO anticipates that by increasing the size of the project by 20%, it can position Australia at the heart of the international supply market.

“We took many learnings from our existing plant in the design and construction of the new facility but the project had inherent challenges, as you would expect with a facility of this nature.“

Just one example of the challenges in creating the design was the need for areas with different atmospheric pressures.

The acquisition and installation of the hot cells was complicated by the fact that they have to be purchased from overseas, built, taken apart and then shipped to Australia to be re-assembled in the new facility.

“This process has helped to build knowledge and capability in Australia.”

“The introduction of programmable logic controllers (PLC) as part of the facility instrumentation introduced some challenges, particularly as part of the GMP accreditation. Nonetheless we are very pleased with this advancement as it makes some aspects of operating the plant easier.”

The new plant also has superior features for the containment and storage of waste streams that were integrated into the design.

“We designed our holding tanks specifically for this building, unlike our existing plants where they were retro-fitted. The waste tanks are located in an area of the basement, where the foundations of the building serve as shielding. This is not an open access area.”

At the time the new plant was constructed, an underground pipe was added which will take liquid waste from it to the SyMo waste treatment facility across the road.

A new plant under construction: SyMo

The SyMo plant, which will use ANSTO Synroc to treat and encapsulate waste from molybdenum production, is now under construction.

“In this case, safety features include a pipe that is jacketed within a secondary pipe that is contained within a concrete duct for protection, shielding and corrosion prevention.”

The government funding of $168 million was allocated for the construction of both facilities, which will operate in tandem when SyMo is operational.

In looking back, Druce is complimentary to the regulators, ARPANSA and the TGA , who he described as highly engaged and supportive of achieving a good outcome to benefit all Australians well into the future.

“One of the biggest challenges was delays experienced during the finalisation of complex construction components, specifically the hot cells and the control systems.”

“These delays were unfortunately contributed to by the project’s contractual structure, including the use of numerous international subcontractors”.

“Importantly, to avoid similar issues being encountered on the SyMo project, ANSTO has structured the project delivery and construction contract with its primary contractor differently.”

The SYMO facility is a first of its kind in the world.  ANSTO is using its existing expertise built up over 60 years and the experience gained in the Mo-99 plant to manage the SyMo project itself.  This helps protect the valuable IP that is already creating significant interest around the world.

Right now, there is a great sense of anticipation for operations to commence and optimism that it is the beginning of a new era in nuclear medicine production in Australia.

“Most of the evaluation of the production process has been done. It may just be a question of finding little things to do better once we are up and running.”

ANSTO acknowledges and celebrates the skill and expertise of its own people who have helped see this project to fruition.

Any major construction project will have a unique story. The successful completion of ANSTO’s molybdenum manufacturing  facility is very much linked to the passion and commitment of people like Michael Druce who helped make it happen. 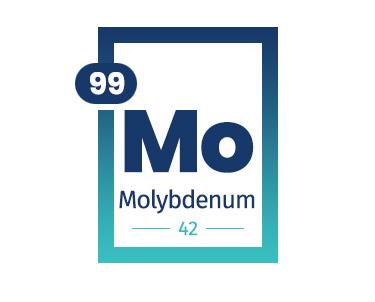 This man-made isotope of molybdenum is the precursor of the world's most commonly used diagnostic imaging agent, technetium-99m. At ANSTO, it is created by the fission of uranium in the OPAL multpurpose reactor. It has a half life of just 66 hours.  Molybdenum-99 requires processing and purification before it is added to ANSTO's Gentech generator for distribution to hospitals and nuclear medicine practices around Australia.