With the forthcoming establishment of a proton therapy facility in South Australia and a proposed National Particle Treatment and Research Centre for Australia, ANSTO has a core group of human health and radiation measurement specialists who are undertaking research relating to these advanced techniques.

“We are focused on cancer therapy using hadronic matter, such as carbon ions, because of its high impact on the target and low levels of side effects: two major advantages compared to conventional X-ray therapy” said Prof Marie Claude Gregoire, Research Leader, Human Health.

Heavy ions deliver the maximum dose at the site of the tumour, since they deposit their energy at the very end of their path through matter (known as the Bragg peak) and largely spare the surrounding healthy tissue.

ANSTO is collaborating with the Centre for Medical Radiation Physics at the University of Wollongong (UOW) and the National Institute of Radiological Sciences (NIRS) in Japan on carbon ion therapy research. 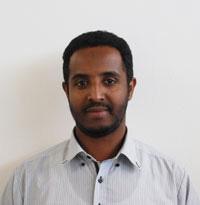 Dr Abdella Ahmed (below right) has been recently recruited as a joint postdoctoral fellow between ANSTO and UOW and is now working in the ANSTO Human Health Research group with a research focus on in-beam PET imaging - in which PET imaging is used for quality assurance during irradiation of the target (tumour).
He joins Dr Mitra Safavi-Naeini, who is the Imaging Quantification Research Lead.

Ahmed has experience in the design, simulation and performance evaluation of PET scanners as well as PET image reconstruction.

PET is the only clinical imaging method which can verify that the correct dose has been delivered accurately to the target.

“When the patient is receiving therapy, you can produce PET images of the secondary particles, positron-emitting radionuclides, which are created by the primary beam due to nuclear fragmentations,” said Ahmed.

Different species that are created and emit positrons at different rates can be used to estimate the dose profile indirectly.

“What you see and quantify in the image allows you to determine the depth at which the dose was deposited, and confirm that it conforms to the tumour site,” said Ahmed.

The measured activity from the target activation of carbon comes from the decay of secondary particles.

Computer modelling and simulation of the process is also necessary to validate range estimation methods and plan experimental work.

Currently, Ahmed is modelling PET scanners for in-beam PET imaging for use during carbon ion therapy.

He spent three years as a post-doctoral researcher at NIRS in Japan, which has one of the most advanced programs in the therapeutic use of heavy ions.

Heavy ion therapy is quite sensitive to spatial range uncertainties due to its very steep dose profile, research such as Ahmed's is supporting the development of new methods for direct dose estimation based on the detection of secondary fragments.

“Right now our intent is to implement a precise model of the in-beam scanner used at NIRS' HIMAC facility, using the Geant4 Monte Carlo simulation framework, and to develop a novel image reconstruction method which can be used for accurate estimation of the spatial distribution of the positron-emitting fragments that are created when the beam is delivered to the target,” said Ahmed.