The surface properties of materials can be significantly modified by techniques such as ion implantation which is used to improve the hardness of polymers and metals but materials must demonstrate sufficient radiation tolerances during the process. The ion implantation process has applications in medical devices and prostheses, mechanical parts and is used widely to produce a range of industrial metals.

A research group including senior materials engineering scientists from ANSTO have successfully overcome the technical problems of evaluating the tensile strength of irradiated materials in situ at a little-studied scale for engineering applications. Their research has elucidated the deformation response of ion irradiated nickel to elongation at the mesoscale and captured images of it.

Subsequent transmission electron microscopy (TEM) confirmed that slip lines were stopped by a layer with a high concentration of helium that is characterised by the presence of voids.

SEM allowed the researchers to observe the deformation process as well as measure the changes in load and elongation.

The results of the collaboration between Ashley Reichardt and Peter Hosemann from the University of California Berkley and ANSTO have been reported in a paper published in Acta Materialia.

Because ion damage is not uniform through the thickness of the sample and penetrates to only a narrow depth, measuring the changes to mechanical properties, such as strength and ductility, requires precise size and orientation of the test sample.

Focused ion beam (FIB) technique was used to cut the sample in the desired shape for tensile testing. The nickel samples were approximately 30 microns long and 10—12 microns thick.

High precision in situ micro-mechanical testing technology at ANSTO made it possible to carry out the experiments on these extremely small samples.

“These are very difficult experiments to do but the interpretation is relatively easy,” said Bhattacharyya, who spent a year and a half mastering and solving the technical challenges in the in situ micro-mechanical testing machine techniques.

Irradiating a target sample with high energy ions can cause the same damage that would require years to accumulate in a nuclear reactor. This type of irradiation makes it easier to handle the test samples as they do not become radioactive in general.

In this research, senior research scientist Mihail Ionescu from the Centre for Accelerator Science accelerated polarised helium across an extremely high electric field in the Star accelerator to cause damage of 10 displacements per atom (dpa) in one sample and 18 dpa in the other sample. 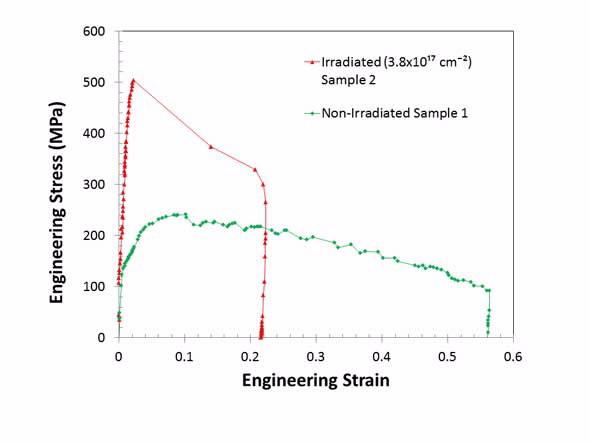 In elastic deformation you are pulling atom from atom and will eventually overcome the attractive forces, causing brittle fracture.

The TEM also revealed a dark band, where helium ions had knocked out atoms in a cascade. Some displaced atoms form clusters, which are not very efficient in stopping slip lines.

As part of the experiment, they removed the top damaged layer and then applied stress. Analysis confirmed that the peak damage region with high helium concentration was preventing the dislocations from passing through the whole sample.

The sample with the lesser dose of radiation showed an increase in strength up to 370 MPa but showed a first rupture at 1.7 per cent elongation. Strain jumps and stress drops were followed alternatively by stress rise caused by activation of new channels of dislocation slip.

The current study focused on single grain crystals of nickel. The next step would be to examine a polycrystalline sample. The picture of dislocation motion is more complex in polycrystals because grain boundaries will arrest dislocations.

“A more complicated study of micromechanical testing of ion irradiated polycrystalline nickel samples should elucidate the deformation processes in other industrial materials as well”, said Bhattacharyya.