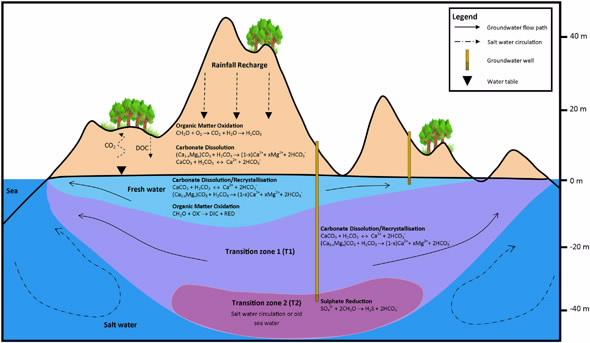 ANSTO environmental scientists have contributed to research on Rottnest Island that has provided invaluable information about its groundwater system that may be relevant for the sustainability of many other islands around the globe.

Rottnest Island, a national park and popular tourist destination, has a freshwater lens under it that sits atop seawater.

They are described as lenses because of their oval shape and are formed from rainwater seeping down through soil. The seawater stays below the freshwater because it is denser.

The groundwater source from the lens on Rottnest Island was previously used as a water supply but the community now has a desalination plant.

The Rottnest Island Authority wanted more information about the groundwater system to understand it and plan for the future.

“We were there to provide that advice,” said groundwater scientist, Dr Karina Meredith, a co-author of one of the papers published in Science of the Total Environment.

“Using isotopic techniques and other methods, we were able to show that there is not only modern seawater below the freshwater lens but that there is older seawater in some sections of the aquifer,” said Meredith.

“We were able to establish that there were three types of groundwater—fresh, brackish and saline.“

Any change in equilibrium in the system will also change the environment of the microorganisms that live in the soil zone.“The freshwater was modern, as was the first layer of seawater, but the lower layer of saline groundwater was 2000 years old, which is not what we expected to find. “

We expected the groundwaters to be all young and that tritium, which is very useful in determining the age of younger groundwater, would be our main age tracer.

But some of the groundwaters contained no tritium and therefore the research looked at the organic and inorganic carbon cycle which is important to define in carbonate systems, such as Rottnest Island.

In-fact using accelerator mass spectrometry, we were able to get measurement of 14C from dissolved organic carbon to get an age on the tritium-free seawater, whereas traditional inorganic carbon dating methods were not able to give us reliable ages”.

The co-authors found that the old seawater did not evolve along a similar pathway to that of the modern groundwater. It may have arisen from either the slow circulation of water within the seawater wedge or from old remnant seawater (at a time when sea level was about four metres higher)

The study involved field work over three years, sampling and monitoring of groundwater from 30 sites across the island, as well as rainwater and seawater collection.

The phenomenon of a freshwater lens becoming salty is expected to become a world-wide problem as climate change impacts island settings. This is especially important when groundwater occurs predominantly by rainfall.

Earlier work by the same group of researchers had previously established that there was no connection between the island’s hypersaline lakes and the freshwater lens and groundwater volume reduction was linked to levels of rainfall and not pumping.

“Rainfall is the primary driver of recharge in the system,” said Meredith.

Only 2 per cent of volume reduction could be attributed to pumping while 30 per cent was explained by a decrease in rainfall.

The island has an average rainfall of 691 mm a year but an average evaporation rate of 1694 mm a year.

There has been a decline in rainfall in southwest Western Australia since the 1970s, which is causing a change in the equilibrium of the lens and reducing the volume of freshwater.

The freshwater lens also feeds natural springs on the island which is used by the island’s fauna such as quokkas and reptiles.

“There is a threat of not only losing an important resource but potential harm to the ecosystem that relies on the groundwater,” said Meredith.

Meredith and associates are involved in a similar study on Milingimbi Island in the NT, which also has a freshwater lens.