Such systems are used in a wide variety of applications on ships and submarines. Piezoelectric ceramics have properties that make them useful in navigation, measuring distances, detecting objects or vessels on or under the surface of the water and communication.

The technology has been in operation widely since the Second World War and is one of several types of materials used in underwater sonar transducers. 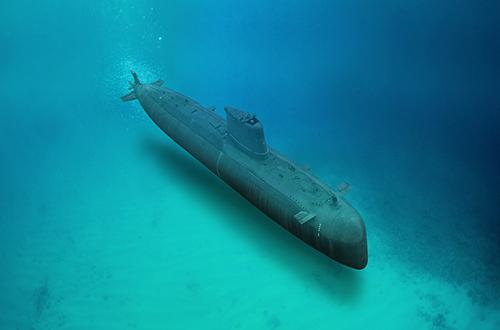 “It is the same basic technology, but obviously there are great opportunities in the development of new materials and in making improvements to manufacturing processes,” said Peter Goodwin, Thales Acoustics Centre of Excellence Director Under Water Systems.

Thales manufactures a diverse range of piezoelectric ceramic components for clients, including the Australian Defence Forces.

Although costlier, higher-performing single crystals have been developed, for some applications, the well-established workhorse piezoelectric ceramic may still be the technology of choice.

“You need large arrays of ceramics to send a signal or “ping” many kilometres through the water column and then listen for the reflected signal to try and find something such as a  submarine,” explained Goodwin.

Thales wanted to improve the characterisation of the piezoelectric material, lead zirconium titanate during the complex manufacturing process, specifically while milling the raw ingredient and product sintering.

There are a wide range of parameter that need to be managed which directly impact the performance of the final product.

Thales’ Acoustics Centre of Excellence manufactures its ceramics with a “mixed oxide” technique designed to produce optimal properties at a minimal cost. This process involves the blending of raw material oxides, pre-reacting them, grinding the oxides to a fine particle size, forming the powder into the desired shape and sintering or firing the body.

“We are pushing the materials to the actual maximum of what they can do. And you must be absolutely certain it will work 200 metres under the surface of the ocean when you are a thousand kilometres offshore,” said Peter Goodwin.

“A lot of production processes controls, such milling speed, have been unchanged for a long time but that doesn’t mean they can’t be improved as we found recently,” said Goodwin.

He thinks good analytical data of characterisation parameters during milling and sintering may reveal opportunities for improvement.

“It has been a little challenging for the participants not to be able to see the production process in person, but we are really encouraged by what they have explored so far. Considering those constraints, they have done extremely well,” said Goodwin.

“They were asking the right questions and not just at the surface level.”

The Underwater Systems business unit of Thales Australia, and its Acoustics Centre of Excellence is located in Sydney, Australia, and has been manufacturing piezoelectric ceramics for around 50 years. The group has developed its own range of piezoelectric ceramic compositions based predominately on lead zirconate titanate (PZT) and also specialist materials including lead magnesium niobium titanate (PMNT) and lead-free formulations based upon barium titanate (BT).

ANSTO has a long association with Thales Australia on materials research.

ANSTO’s suite of infrastructure and capabilities is ideally suited for solving problems relating to the development and characterisation of advanced materials, and the engineering of manufactured components and processes.