An ANSTO health researcher has received a number of awards for her contribution to the development of a new hybrid technique that enhances the effectiveness of an advanced form of radiation therapy for cancer. 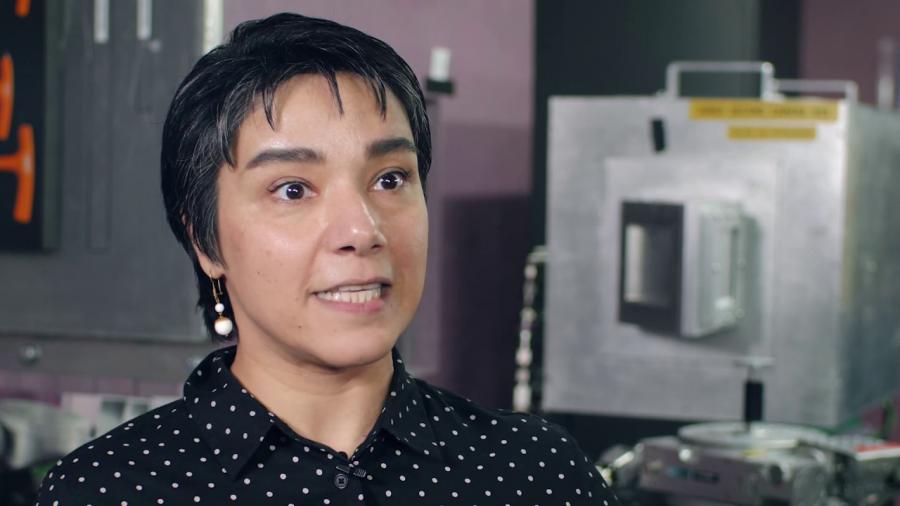 The approach boosts the target dose without increasing the dose to healthy tissue and delivers a significant dose to secondary lesions outside the primary treatment area.

Dr Mitra Safavi Naeini, Imaging Quantification Research Lead in Human Health, has received one of the 2018 Fraunhofer Innovation Awards from the German Embassy, which will enable her to carry out proof of concept experiments at German particle therapy centres later this year.

In 2017 Safavi-Naeini (pictured right) was selected as a recipient of the Union for International Cancer Control (UICC) and the UICC Japan National Committee Yamagiwa-Yoshida Memorial international Cancer Study Grant Fellowship. The award allows her to gain additional proof of concept evidence at the National Institute of Radiological Science in Chiba Japan.

Both Japan and Germany have leading facilities to deliver particle therapy to cancer patients, with many years of experience with the treatments.

An application to participate in the ON Prime Program this year was also successful. Safavi-Naeini and colleagues from ANSTO and the University of Wollongong will take part in the program which assists researchers in accelerating concepts to market delivery.

ANSTO has acquired a provisional patent for the NCEPT method.

Particle therapy, a technologically advanced form of radiation therapy that precisely delivers energy to destroy tumours with minimal side effects, will soon be available in Australia. The first proton therapy facility is now being planned for South Australia, and ANSTO is among a group of organisations advocating for the establishment of a national heavy ion treatment and research facility.

Safavi-Naeini and PhD student Andrew Chacon of the University of Wollongong (UOW) developed the concept while estimating the quantity of thermal (low-energy) neutrons produced as a by-product of particle therapy. These neutrons are produced when the protons or heavy ions collide with tissues in the body, which sometimes result in nuclear fragmentation.

The thermal neutrons that are produced with particle therapy do not stay localised to the target volume.

“We thought that because there already are several tumour-specific drugs that can capture neutrons, we could administer them to patients prior to particle therapy. The neutron capture process releases more energy inside the tumour, where it is beneficial, and reduces the neutron dose to healthy tissues around the treatment site,” said Safavi-Naeini.

Simulations show that in some tissues, current drugs can deliver a benefit of the order of 5-10 per cent – however, newer drugs currently under development may offer even greater enhancement.

Preliminary experiments and simulations to date have been most encouraging, allowing the acquisition of a provisional patent.

Using the fellowship that will take her to Japan, Safavi-Naeini will test the drug with cancer cells that are irradiated with and without the presence of neutron capture drugs and compare their survival rates against control cells.

She is also looking for other clinical centres that deliver particle therapy to build more evidence for proof-of-concept.

There are a number of innovative aspects to the therapy.

The two isotopes used in the neutron capture agent are boron-10 and gadolinium-157.

“We are excited about the simulation data, which suggests that the thermal neutron dose could reach a target up to 14 centimetres deep. This means you have the possibility of reaching deep-seated tumours,” said Safavi-Naeini.

“It may be beneficial to radiation resistant tumours, neuroblastomas in children, or a way of treating secondary lesions in the brain.”

Because gadolinium is also a contrast enhancement agent for imaging purposes, it also opens up the possibility of vertical integration in treatment.

“We could go from pre-treatment through to post treatment using the same agent to guide treatment planning, monitor treatment quality and evaluate its effectiveness,” said Safavi-Naeini.

“What has been achieved would not be possible anywhere else, because of the multidisciplinary team at ANSTO and the Centre for Medical Radiation Physics headed by Distinguished Prof Anatoly Rozenfeld University of Wollongong, who have considerable expertise in understanding the biological response to radiation and using it to therapeutic effect,” said Prof Marie Claude Gregoire, Leader, Health Research at ANSTO

Andrew Chacon, who is doing his PhD under joint supervision of Dr Safavi-Naeini and Distinguished Prof Anatoly Rozenfeld and Dr Susanna Guatelli at the Centre for Medical Radiation Physics at the University of Wollongong, is a co-inventor of NCEPT.

“Prof Rozenfeld, with his vast experience and expertise in radiation dosimetry and microdosimetry, has given us a lot of valuable feedback in going from the physical dose to the biological dose and helped establish connections to the international network of particle therapy centres,” said Safavi-Naeini.

“When NCEPT was introduced to the neutron capture and particle therapy communities at a conference in 2018, the response from both groups was very positive. This motivated us to take the concept further,” said Safavi-Naeini.