Although firmly located on earth, the Australian Synchrotron’s Terahertz/Far Infrared beamline (THz/Far IR) is one of three synchrotron facilities in the word able to simulate the extreme conditions of distant planetary worlds.

The most recently reported research using the beamline published in Earth and Space Chemistry, involved recreating the pressure and temperatures environments in the hazy atmosphere surrounding Saturn’s moon Titan. 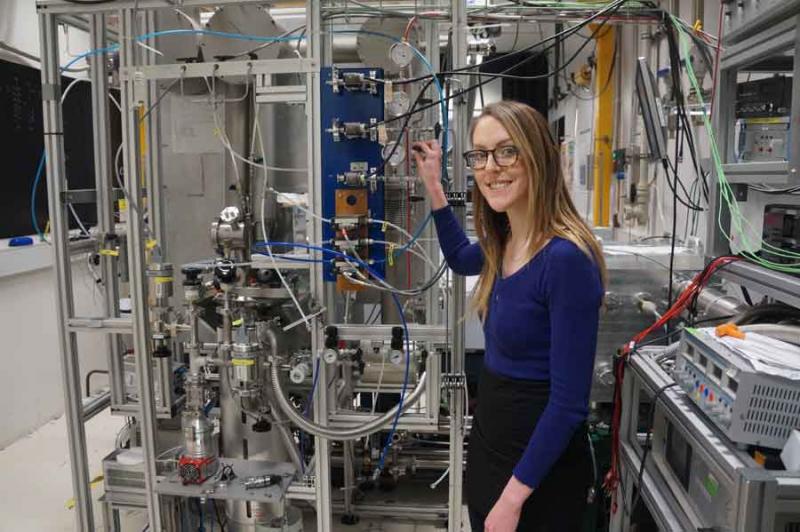 “We are interested in Titan because it is the most Earth-like of the planetary bodies possessing an atmosphere of mostly nitrogen and methane,” said co-author Rebecca Auchettl (pictured above), a PhD candidate who was supervised by Dr Courtney Ennis, formerly of La Trobe University now at the University of Otago in New Zealand.

“Hydrogen cyanide is one of compounds formed from Titan’s basic ingredients when exposed to harsh radiation, with cyanides potentially play important roles in forming amino acids, the building blocks of life.”

“If we understand how these chemical processes take place on Titan, it may shed light on how life formed in Earth.”

The beamline then collected far infrared spectral signatures of the aerosols to track the formation and depletion of nitrile ice particles over a 3-minute period.

“We took aim at some of the main candidates observed in Titan’s atmosphere, comparing our data to the far infrared features detected by the Cassini-Huygens spacecraft and theoretical models,” said Auchettl.

The composite infrared spectrometer on-board the Cassini spacecraft recorded these spectra to provide profiles of trace gaseous constituents and isotopic ratios as it scanned Titan’s hazy atmosphere, which suggested composite ice mixtures of nitriles were present… but needing laboratory verification. 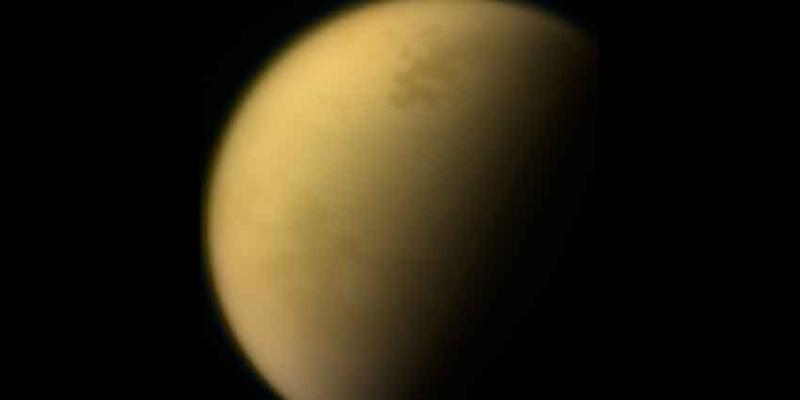 According to post flight analyses, at colder altitudes near Titan’s tropopause (50 km; 80 K) species of hydrocarbons and nitriles reach saturation levels, enabling either the formation of pure ice aerosols or the condensation of ice layers onto the surfaces of descending haze particles.

The pure nitriles, acetonitrile and propionitrile were ruled out as Titan ices in previous work by Ennis et al.

This led them to investigate particles formed by the co-crystallisation of nitriles and water as mixed phase ice; a more probable Titan scenario.

Despite being polar species easily mixed under terrestrial conditions, mid infrared spectra suggested that the only interaction between acetonitrile and water occurred at the grain boundaries of Titan ice.

“We were aiming to be the benchmark for future space-exploration investigations. To confirm the detection of these species in Titan’s atmosphere, you need independent laboratory data, astronomical observations and theoretical validation to support the inference,” said Auchettl.

“We have provided aerosol signatures for future IR surveys for nitrile ices in planetary atmospheres.”

As part of the research, the group were assisted by Dr Helen Brand who provided the first crystal structure for the propionitrile, which was necessary for the calculations.

The work also excluded acetonitrile and water binary aerosols as a carrier for the ‘haystack’ feature, an ice cloud in Titan’s stratosphere with an intense spectral feature.

Beamline scientist, Dr Dominique Appadoo said the instrument was of great interest to astrophysicists, such as the La Trobe group, who wanted to re-create the extreme conditions that you find in space.

Auchettl, who received a Postgraduate Research Award from the Australian Institute of Nuclear Science and Engineering (AINSE), has submitted her PhD and is now an accelerator physicist at the Australian Synchrotron.