Australian Synchrotron X-ray and infrared imaging techniques have been used in a powerful combined approach to characterise the composition of amyloid plaques that are associated with Alzheimer’s disease.

Alzheimer’s disease is major international health problem that accounts for 50-75 per cent of all cases of dementia in Australia. More than 400,000 Australians are living with dementia and it is the second leading cause of death.

Amyloid plaques are complex protein fragments which accumulate between nerve cells in the brain and may destroy connections between them, and are hallmarks of Alzheimer’s disease.

“However, it is still not known if the plaques cause Alzheimer’s or whether the Alzheimer’s causes their formation, which is why we need to improve our understanding of protein structures within plaques, and the molecular and elemental composition of tissue surrounding the plaques“ said Dr Mark Hackett of Curtin University, who led the research.

The study was published earlier in the year in Biochemistry.

“It is something that really hasn’t been done before in Australia and demonstrates the power of the approach” said Australian Synchrotron instrument scientist Dr David Paterson. He and Dr Mark Tobin of the Synchrotron were among a large team of collaborators from Curtin University, the University of Saskatchewan and The University of Adelaide. 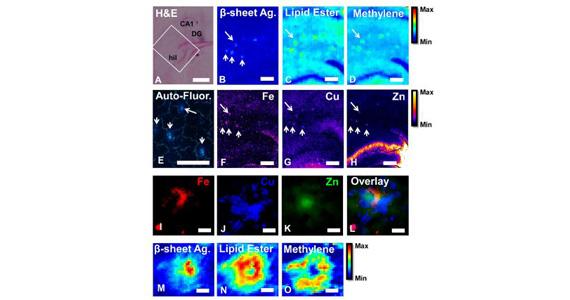 Metals have long been associated with amyloid plaques and Alzheimer’s, and a number of leading international research groups have used synchrotron techniques to reveal metal distribution within plaques. However, the exact role of metals in Alzheimer’s disease is still not known, “which is why it is important to correlate metal concentration and distribution within plaques to alterations of important biochemical parameters, such as lipids and proteins” said Paterson, who assisted with the collection and analysis of X-ray fluorescence microscopy data (XFM).

The bright source of X-rays produced by the Australian synchrotron is a major advantage for XFM.

“You have a high energy X-ray coming in and if it is absorbed by an iron atom it will re-emit X-rays at a very specific energy and we have detectors that can tell the difference between the X-rays coming from iron or copper. The more iron atoms there are in a particular location, the more fluorescence we will see from there,” said Paterson.

Not only can XFM differentiate between different elements, but X-ray fluorescence microscopy is a direct imaging technique that does not involve any staining. This is really important, as the typical staining methods often used to study Alzheimer’s disease, may remove important chemical information from the tissue.

“To be able to study metal and molecule distribution, without staining, is a really unique capability, and is made possible with synchrotron light” said Hackett.

The XFM beamline was used to complement Raman spectroscopy and infrared microspectroscopy in determining the location of specific metals within the plaque and classes of molecules such as lipids, cholesterol and aggregated protein. The results indicated that intense zinc and some iron were found within the plaque core, while the copper is spread out in a cloud-like shape at the periphery.”

“Because you can overlay the fluorescence images of each element, you acquire a useful chemical composite of the plaque,” said Paterson.

“At this stage, we are unsure of the exact meaning of the co-localisation of lipids and Cu in the plaque core, however, we now have an imaging methodology that allows us to study this in the future, which is an important step forwards”, said Hackett.

“The IR microspectroscopy, when complemented by Raman microspectroscopy indicated that there was an increase in the levels of copper and  lipids at the periphery of the plaque,” said instrument scientist Dr Mark Tobin, who assisted in the data collection and analysis of the Synchrotron source FTIR.

“Future research into the interactions between copper and the lipids in the amyloid plaque is worthy of further investigation.”  said Hackett.