Research at the Australian Synchrotron provided insights into the microstructure of a form of paracetamol, which contributed to better water solubility and compressibility than the more stable commercially-used product.

Infrared microspectroscopy was used to determine the molecular orientation of the microstructure.

Solubility in water, thermal stability while medically active, mixing, behaviour under compression and mechanical structure are key attributes of pharmaceuticals, such as analgesics.

The investigators noted that molecular orientations and domain structure are critically important for enhancing the efficacy of drugs.

In a paper published in Applied Surface Science, a group of researchers led by Professor Junko Morikawa and Dr Reo Honda from the Tokyo Institute of Technology, Swinburne University and the Melbourne Centre for Nanofabrication, in association with IR beamline scientists Dr Mark Tobin and Dr Pimm Vongsvivut, used optical mapping to reveal the orientation of molecules in the paracetamol.

Because of limited information about in situ phase transitions, the findings of the study are relevant for the industrial production processes of medical tablets and powders.

In work that was similar to an approach previously reported by this team in investigations on microfibers of silk, the group used absorbance data to gain information about the orientation, presence of disorder and grain boundaries within the crystalline material.

“If you look at the figure above, you can see for each of the absorbance wavelengths that are displayed, two different domains can be seen where the black markers that are over each pixel are quite short in one region which shows a weak orientation, and then where the markers are much longer shows the high degree of orientation,“ said Tobin.

“It is telling you the direction of the absorbing molecular dipole which is not necessarily the same as the orientation of a linear molecule.”

Using the four angle method they developed for IR spectral mapping, the polariser is rotated through forty-five degrees for each of the four images that are collected.

“The setup of the beamline is a little more than routine, said Vongsvivut. We had to make sure that the alignment of the Synchrotron beam, which is naturally polarised, was such that we were still getting good throughput for all four orientations of the polariser.”

In addition to IR absorbance and retardance spectral mapping, the team analysed thermal characteristics of the polymorphs of paracetamol using differential scanning calorimetry.

Beyond the study, the main interest of the IR team was to demonstrate the usefulness of the technique to show degrees of molecular orientation, which can be applied to antibacterial bio-materials, and the internal laser structuring of transparent glasses and dielectics.

“We are also exploring the application of this technique on composite materials," said Tobin. 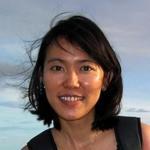