Environmental scientists are considering how ANSTO’s expertise, infrastructure and analytical capability could play a role in Australian plans to drill a million-year ice core record in Antarctica.

This project is a cooperative venture within the International Partnerships in Ice Core Sciences (IPICS) which will likely see two or more international drilling projects beginning early in the next decade.

An important aspect of the project is to resolve the mystery of why the duration of ice ages has lengthened. To date, the longest ice core record of over 800,000 years was obtained from Dome C in Antarctica by the EPICA consortium.

”It clearly demonstrates the tight coupling of climate and greenhouse-gas concentrations, which can be measured directly on atmospheric gases trapped in the ice sheet.

Intriguingly, while this record also shows that recent interglacial-glacial cycles were of approximately 100 thousand year duration, ocean sediment records reveal a shorter pacing of around 40 thousand years existed before about a million years ago.” said Smith

“We don’t understand the processes that set this ‘climate pacemaker’ but it is likely to involve changes in greenhouse gases and the way they amplify small variations caused by changes in the earth’s orbit.

This is why the quest for million-year or older ice, where the greenhouse gas concentrations can be measured, is considered to be so important,” said Smith.

ANSTO has both infrastructure and expertise to contribute in the analysis of beryllium-10, chlorine-36 and carbon-14 and other radiotracers that can provide crucial information.

“Beryllium-10, which is produced by cosmic rays interacting with the atmosphere, can be used as a proxy for past solar activity,” said Smith, who has retrieved and analysed ice cores from Antarctica and Greenland over the past two decades.

Furthermore, beryllium-10 and chlorine-36 provide markers that can help pin down the ice core chronology, essential for interpreting the record. On shorter timescales, carbon-14 is also useful.

These trace chemicals are separated from the ice by ion adsorption or by separating and analysing the occluded gas. Once the sample has been prepared, it is analysed using accelerator mass spectrometry, which has the sensitivity to measure concentrations of these isotopes to just 1 part in 1016.

In 2016, the Australian Government, released its Australian Antarctic Strategy and 20 Year Action Plan, which committed to leading a drilling project, in cooperation with other international partners in the IPICS community.

The Australian Antarctic Division (AAD) is preparing for this project, which is led by AAD Program Leader, Dr Tas van Ommen.

Other international teams are also planning drilling programs. This is seen as a necessity by IPICS, as the deepest and oldest portions of the cores will need to be replicated.

Van Ommen stressed the international nature of the project, adding that “the separate drilling projects will be highly collaborative with cooperation and participation expected across both logistics and science.”

Glaciologist Dr Mark Curran of the Australian Antarctic Division was recently at ANSTO to outline the scope of the project and investigate collaborative opportunities.

Activity to date has focused on finding the best site to extract ice that is one to one and a half million years old.

Ice penetrating radar transects and modelling are used to narrow down the location, where ice should exceed one and a half million years. 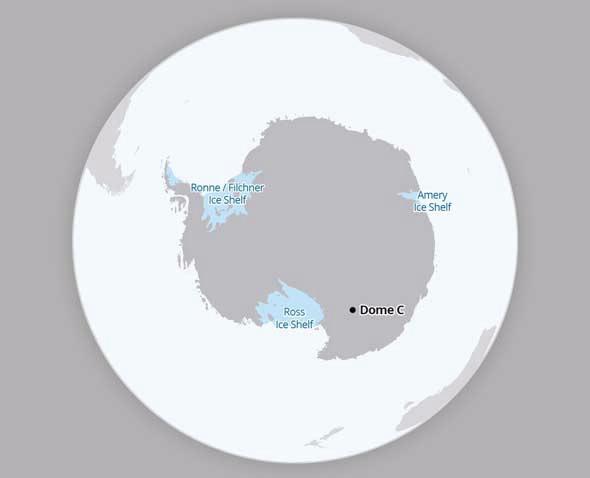 Dome C on the Antarctic plateau, has been targeted for further investigation. An 800,000 year old ice core has been previously extracted from the area.

Many factors affect the suitability of ice.

“We need ice that is thick but not too thick, from an area where there is low snowfall without erosion. There should be a low ice flow speed without melting or folding,” said Curran.

The integrity of the stratigraphy in the ice is also crucial to relate ice to a specific time or period.

Glacial ice is layered and contains trace chemicals, air bubbles, dust and other impurities. These constituents, although often invisible, can be measured to identify annual layering and so establish the depth versus age relationship.

“This becomes more challenging with depth as the annual layers are thinned and compressed," said Curran

Once a site has been decided the logistical challenges begin.

Getting equipment and people to a location that is almost 1100 kilometres from Australia’s coastal Casey Station requires considerable planning.

A temporary shelter is constructed over the drilling area to protect equipment, work areas and personnel.

As part of the Australian Antarctic Strategy, the AAD is building its traverse capacity, ice core drilling and infrastructure in the coming years.

Survey work to find the best site has been underway for several years. Australia has participated with airborne radar surveys and ice sheet modelling.

Once the site is established, and drilling begins, ice cores will be retrieved in sections that about two metres in length.

Drilling will take place over approximately four years, commencing around 2020-21 summer, with analysis of the ice continuing in the following years.

Project participants emphasise that it is not a race among nations but an opportunity for international cooperation to understand and address significant changes to the Earth’s climate.