Dr Linda Croton, a Research Fellow in the School of Physics and Astronomy at Monash University, has been awarded the 2020 ANSTO Australian Synchrotron Stephen Wilkins Thesis medal for her outstanding work using synchrotron-based X-ray phase contrast CT for in situ brain imaging. The award was announced on 20 November during the virtual Australian Synchrotron User Meeting, which showcases the achievements of scientists who have used the facility in their research.

Dr Croton used the X-ray technique to visualise and discern soft tissues in the brain in situ that are particularly challenging to capture in an X-ray image because of proximity to the skull.

“This research has important applications in the life and biological sciences where an ability to image soft tissue without staining is of immediate application” said Prof Andrew Peele, Director of the Australian Synchrotron.

Her PhD examiners noted that Dr Croton had pushed the field of phase contrast imaging ahead with her accomplishments that included determining the most appropriate phase contrast X-ray imaging (PCXI) method to visualise soft tissue in brain, achieving a world-first imaging of the brain in situ at the micron scale—delineating the boundaries of white and grey matter, and the development of a new calibration method to manage visual artefacts (image noise from non-uniform detector response). While completing her PhD, Dr Croton spent more than 1500 hours on the Imaging and Medical beamlines at the Australian Synchrotron and the Spring-8 Synchrotron in Japan and published seven journal articles relating to the investigations.

Regarding her thesis research, Dr Croton said, “This work has enabled preclinical investigations at the IMBL into subtle types of perinatal brain injury that are extremely difficult to resolve using existing imaging methods. My colleagues and I aim to take this research a step further, combining these methods with new approaches to phase retrieval and dose reduction to enable artefact-free, in situ brain imaging at doses compatible with current clinical imaging standards, ultimately pushing on toward a long-term goal of bringing these methods into the clinic”.

The Monash supervisors praised the work because of its implications for both pre-clinical imaging and future neuro-imaging.

Dr Croton collaborated with the Hudson Institute of Medical Research and synchrotron scientists at Spring-8 on her studies.

A total of 23 applicants applied for the highly competitive award.

The Stephen Wilkins Thesis Medal is awarded annually to the PhD student at an Australian or New Zealand University who is judged to have completed the most outstanding thesis of the past two years whose work was undertaken at and acknowledges the Australian Synchrotron, or the Australian National Beamline Facility (ANBF).

It can also be awarded to a PhD student whose work acknowledges and was undertaken under the auspices of the International Synchrotron Access Program (ISAP) or the Australian Synchrotron Research Program (ASRP).

The prize was established in honour of Stephen Wilkins, who was a stalwart of the Australian Synchrotron and was influential on several beamlines.

In the early 1980s, as one of the first enthusiastic proponents of synchrotron radiation in Australia, Steve Wilkins demonstrated how important this new tool would be to all the scientific disciplines.

By serendipity, Dr Croton works in an area, in which the medal namesake, Stephen Wilkin, was an important contributor. Stephen and his collaborators pioneered the technique of phase contrast imaging, which was an important driver for the development of the Australian Synchrotron’s imaging and medical beamline 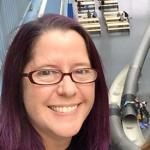