An expert group of imaging scientists in Sydney and Melbourne are using the Imaging and Medical Beamline (IMBL) at the Australian Synchrotron as part of ongoing research on an innovative 3D imaging technique to improve the detection and diagnosis of breast cancer.

The technique, known as in-line phase-contrast computed tomography (PCT), has shown advantages over 2D mammography with conventional X-rays by producing superior quality images of dense breast tissue with similar or below radiation dose.

Research led by Prof Patrick Brennan of the University of Sydney and Dr Tim Gureyev at the University of Melbourne with funding from the NHMRC and the support of clinicians in Melbourne including breast surgeon Dr Jane Fox,  is now focused on demonstrating the clinical usefulness of the technique.

Together with Associate Professor Sarah Lewis and Dr SeyedamirTavakoli Taba from the University of Sydney heading clinical implementation, the technique is expected to be tested on the first patients at the Australian Synchrotron by 2020.

“Although Australia has some of the best radiologists in the world, the challenge is that the density of breast tissues varies from woman to woman and race to race,” explained Prof Brennan, an authority on diagnostic imaging.

Both younger women and Asian women among others have dense breast tissue.

Brennan said that it is more difficult to see the cancer in dense breast tissue because both appear as white in a mammogram. This high density masking effect causes some cancers to be missed or more false positives where there is uncertainty.

“PCT produces 3D images that have superior quality, which makes us confident. We are now working on validating the clinical usefulness of the approach.”

To do this, they will combine a large number of images of normal breast tissue and known cancerous tissue, and see how accurately the radiologists can identify the cancer.

The Brennan, Gureyev, Lewis and Taba team are currently designing a study that will allow them to determine the sensitivity and specificity of the technique using mastectomy samples.  Co-investigator, Dr Darren Lockie State Breast radiologist for Victoria is also a key team member in developing strategies to allow PCT imaging to be incorporated into a screening or diagnostic imaging pathway.

Essential support for the project in terms of supply and analysis of breast tissue samples is also provided by the Head of Pathology at Monash Health, Dr Beena Kumar, Tissue Bank Manager, Ms Zdenka Prodanovic, and an experience pathologist from Dorevitch Pathology, Dr Mikkaela McCormack.

Some of the power of the technique, which was developed using conventional X-rays in the late 1990s by Prof Keith Nugent and the late Prof Stephen Wilkins, comes from the use of high energy X-rays from the Australian Synchrotron’s imaging and Medical Beamline.

Dr Gureyev has led the pioneering clinical work with PCT, bringing his physics expertise to a wider multidisciplinary team.

Prof Andrew Peele, Director of the Australian Synchrotron, who has led industry partnership with the NHMRC , said although phase contrast propagation imaging has been demonstrated with conventional X-rays on smaller anatomical samples, the potential for PCT in larger samples and live patients was still to be explored.

The PCT technique for breast cancer diagnosis will be tested on a small number of patients at the Australian Synchrotron, in what will be the first use in semi-clinical setting.

“Patients will be positioned comfortably on a horizontal support and rotated around the synchrotron beam, which has to travel in a straight line,” said Peele.

The PCT technique avoids the need for compression, which is applied in mammograms and causes discomfort in most cases.

Peele stresses that the activity is a proof of concept undertaking and that large scale screening of patients at the Synchrotron is not currently feasible.

“However, if we can establish the superiority of the technique and cost benefit, then we can talk about ways to move it forward into a laboratory setting, increase the number of beamlines or explore other options.”

Peele acknowledged it was only because of the support of Melbourne surgeons and radiologists that the research had progressed so far.

Research teams have been able to use freshly excised samples from women who have had part of or all of a  breast removed, which has greatly aided the investigation.

Imaging of these samples can be compared directly with standard X-ray images.

Both Brennan and Gureyev have a longstanding collaboration with a group of Italian and German scientists at the Elettra Synchrotron, including Dr. Giuliana Tromba, Dr. Christian Dullin and Dr. Serena Pacile, and University of Trieste.

Another potential advantage of the new method is the prospect of reducing the amount of radiation that is delivered to the patient with PCT. 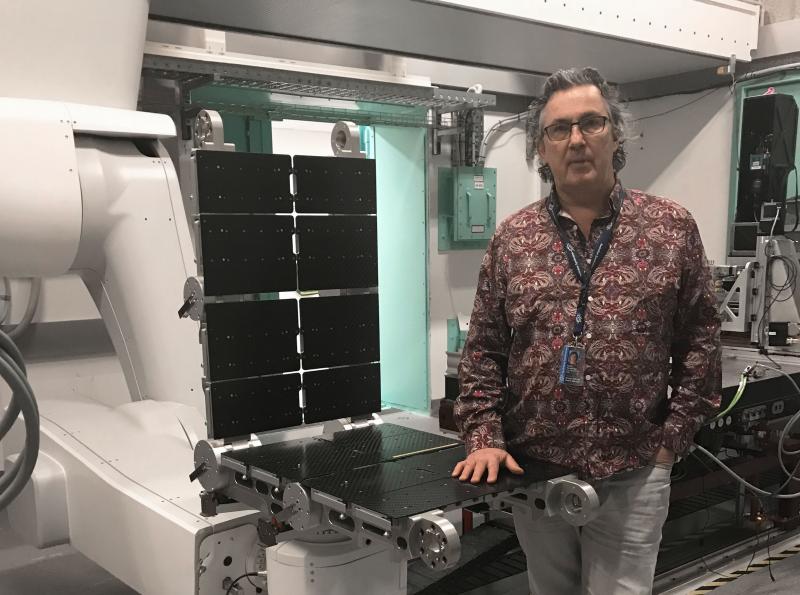 Beamline scientist Dr Daniel Hausermann (pictured above), who has been providing technical assistance to the researchers, is enthusiastic about the approach.

“The beamline needs modification and an upgrade in preparation for the first human patients and we are working hard at it, “said Hausermann.

“In addition to technical adjustments, we would also expect to make some improvements to the physical space, to make it less like a research facility and more like a clinic.”

“There are also the regulatory aspects, which are supervised by ARPANSA and the TGA, which must be met to image patients safely,” said Hausermann.

Consultation with consumer groups will form the next stage of the project to design a clinic environment that is supportive of the experimental imaging.

Earlier this year, the team published a paper in the Journal of Synchrotron Radiation that provided an assessment of the use of PCT images using synchrotron radiation from a mastectomy sample.

The images, which were reviewed by 11 radiologists and imaging specialists as part of the study, confirmed that PCT on breast tissue demonstrated better diagnostic power compared to conventional methods.

Another paper co-authored by the team members as part of a large collaboration of Italian, German and Australian researchers provided a radiological evaluation to determine the optimal conditions for the use of the technique and was subsequently published in Academic Radiology.

As well as its potential diagnostic benefits, the PCT technique could also be used to monitor disease progression and be combined with histological diagnosis for improved early treatment decisions.

“Delivering improved health outcomes is part of what ANSTO does,” said Peele.

"This project is a great example of how well-managed infrastructure can enable advances that were not possible before the Australian Synchrotron was built.

We’re pleased we can share information about the progress of the project during breast cancer awareness month, when we all are reminded of the purpose of the research.”

Read our media release about the research: