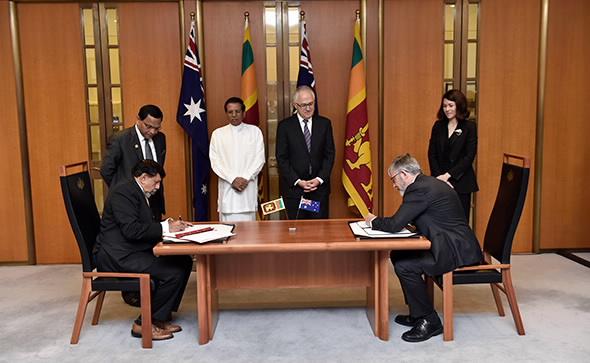 The Australian Nuclear Science and Technology Organisation (ANSTO), signed an MOU with the Presidential Taskforce for Prevention of Chronic Kidney Disease to assist in the fight against chronic kidney disease of unknown aetiology (CKDu).

According to the Journal of Environmental Health and Preventative Medicine (2014), CKDu affects around 100,000 people, and is linked to 5,000 deaths every year.

It is also a serious public health problem in other countries, particularly in Central America, and despite more than 20 years of study in Sri Lanka and globally, it is not well understood.

While CKDu appears to disproportionally affect poor, rural, male farmers in hot climates, the reasons why are not yet clear.

More research is needed, an issue that was raised by Dr Harsha de Silva, Sri Lankan Deputy Minister for Foreign Affairs, when he visited the Australian Synchrotron in March 2017.

Sri Lanka’s High Commissioner to Australia, H.E. Somasundaram Skandakumar, and the CEO of ANSTO, Dr Adi Paterson, signed an MOU that will see Australia provide new insights into the disease.

Under the agreement, ANSTO, which operates the Synchrotron and other national research facilities, agreed to help with “in-kind support to investigate the epidemiology of CKDu.”

“Australia and Sri Lanka have developed a cooperative relationship over the past 70 years, and this new agreement will positively impact on people’s lives, further strengthen Australia’s ties with Sri Lanka, and broaden Australia’s relationships in the region,” said the Australian Minister for Industry, Innovation and Science, Senator the Hon Arthur Sinodinos AO.

“ANSTO is a high performing organisation playing a crucial role in the health of people in Australia and around the world. This chronic kidney disease is linked to thousands of deaths each year, and through ANSTO, Australia will work with our Sri Lankan friends to fight it using science, research and innovation.”

Dr Paterson said that ANSTO and Australia will bring together several types of science and science infrastructure as part of the research effort.

“ANSTO’s expertise is in nuclear science, applied science and management of landmark infrastructure, and this new agreement is an opportunity to bring together all three, and to work on identifying the possible causes and treatments,” said Dr Paterson.

“Under this agreement, we will lend our world-class scientific instruments such as the Australian Synchrotron in Melbourne, and the Australian Centre for Neutron Scattering at Lucas Heights.

“Australia has the expertise and infrastructure to give new insight into this disease, and ANSTO has the medical and research alliances to share, interpret and leverage the findings.”

ANSTO has capabilities to investigate a number of the possible causes, routes of distribution and treatments, particularly in relation to studying any causal links with heavy metals in water, or agrochemicals.

Several hypotheses have been put forward linking the causation of CKDu to various heavy metals, and the quality and quantity of water.

ANSTO has a research team that studies the sources of underground water, its contents and recharge rate, which could potentially be used to compare samples from CKDu ‘hotspots’ to see any commonalities.

Association of individual pesticides with CKDu has been reported in only two studies in Sri Lanka, but a link has not been ruled out.

ANSTO’s Australian Centre for Neutron Scattering has been used in some agrochemical research (primarily focused upon optimising delivery to plants) which could have applications in this space.