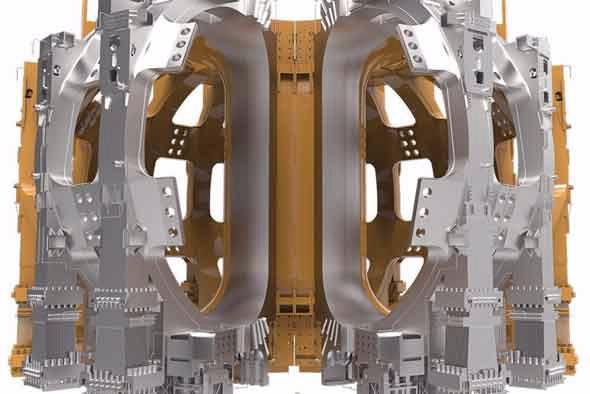 Cables that become superconducting at 4°Kelvin (K) or -269°Celsius (C) are to crate magnetic field trap to initiate, shape and control the plasma inside the vacuum vessel of the reactor. Superconductors are used in the reactor because they consume less power and are cheaper to operate than conventional magnets. They carry higher currents and produce stronger magnetic fields.

“The state-of-the-art superconducting cables are a core component of the project and their performance is a central issue,” said Instrument Scientist Vladimir Luzin.

The two major superconducting cables for ITER are complex structures comprising the toroidal field and central solenoids. Both cable types have the CICC design which comprises a central spiral of bundled superconducting strands made of niobium-tin (Nb3Sn) in copper matrix and enclosed within a structural steel jacket.

During operation of the ITER central solenoid conductors at 4.3° K, the transverse electromagnetic forces, known as Lorentz forces, are generated by a current of 40 kiloamperes (kA) under a magnetic field of 13.0 Tesla (T) causing somewhat distributed loads at the strand to strand contacts along their length. The Lorentz forces are generated by the toroidal field conductors by a current of 68 kA under 11.8 T.

“The Lorentz forces cause a distribution of the loads along their length, generating complex microstress fields” explained Luzin.

“Moreover, the differential thermal contraction between materials of the strands produces strains and stresses on microscopic scale.”

The long term performance of the CICCs in cable prototypes was also known to show degradation with an increasing number of current/magnetic cycles. In the earliest tests, the CICC failed after 1,000 cycles, far short of the quality standard of 60,000 cycles. “Strain in the strands affects the critical current,” said Luzin.

“The degradation of superconducting properties by thermo-electro-magnetic cycling is caused by strains and stresses through the accumulation of microdamage,” explained Luzin.