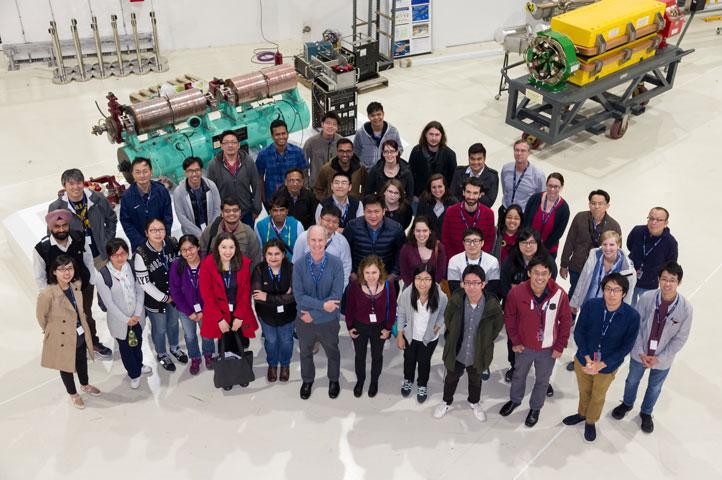 The participants, who are interested in pursuing a career in synchrotron radiation-related fields, had the opportunity to attend a range of lectures and take part in practical sessions on six of the ten beamlines at the Australia Synchrotron.

Those who attended the week-long school came from China, Thailand, Japan, Korea, Taiwan, India, Singapore, New Zealand and within Australia to learn more about the theory and applications of synchrotron radiation for a wide range of science and technology research.

“We were greatly pleased by the level of interest in synchrotron technologies, which are proving to be invaluable across a range of applications and delighted to share Australian and international expertise with the group,” said Prof Richard Garrett, Senior Advisor, Strategic Projects, ANSTO, who was Co-Chair of the school with Dr Mike James, Head of Science at the Australian Synchrotron.

Guest lecturers travelled to Australia from South Korea and the US.

In addition to a general introduction to synchrotron radiation, light source, beamlines, and detectors, the curriculum included sessions on the techniques used on the Australian Synchrotron beamlines, such as medical imaging, powder X-ray diffraction, and micro fluorescence.

At the conclusion of the lectures and practical sessions, participants gave presentations based on their beamline investigations.

“Actual hands on experience with the beamlines is invaluable for planning research projects and understanding the tremendous analytical capabilities of the instruments,” said Dr James.

The Asia Oceania Forum for Synchrotron Radiation Research (AOFSRR) is an association of the eight synchrotron operating and user nations in the Asian region: China, Thailand, Japan, Korea, Taiwan, India, Singapore and Australia,. Its mission is to strengthen regional cooperation in, and to promote the advancement of, synchrotron radiation research. Three additional countries are associate members: New Zealand, Malaysia and Vietnam.

ANSTO has had a close association with the AOFSRR since its inception in 2006, when it operated the Australian Synchrotron Research Program which joined the Forum as a foundation member representing Australia. Since 2012 ANSTO has served as financial manager of the AOFSRR, to facilitate the payment of membership fees by the eight full member nations.

The main activities of the AOFSRR are to organise an annual workshop and an annual synchrotron school. The Japanese SPring8 facility hosted the school, then known as the Cheiron School, from 2007 until 2015. This has now been replaced by the AOF Synchrotron School which will rotate among the 8 member countries. The next school will be held in South Korea, followed by Thailand.