A large international collaboration, which included ANSTO, has successfully synthesised highly porous rhodium nanoparticles that could be used as a more effective catalytic converter for vehicles.

The mesoporous rhodium nanoparticles, produced using a soft template and simple solution chemistry, were thermally stable up to 400°C and three to four time more effective than normal catalytic converters.

Mesoporous nanoparticles are used as catalytic converters to reduce the pollution from vehicle exhaust by converting toxic gases and pollutants to less toxic pollutants.

The research has the potential to significantly reduce the amount of pollution caused by cars and trucks.

The study, led by Bo Jiang and Prof Yusuke Yamauchi of the National Institute of Materials Science and Waseda University in Tokyo and the University Wollongong, was published today in Nature Communications.

Professor Yamauchi said the porous rhodium nanoparticles could make a dramatic improvement to air pollution in cities around the world.

Small angle neutron scattering (SANS) was performed on the Quokka instrument at the Australian Centre for Neutron Scattering by Dr Katy Wood and Dr Md Shahriar Hossain, Senior Research Fellow from the University of Wollongong, to characterise the micelles in solution at two stages of the five step process.

Growing metals inside hard templates, such as mesoporous silica, had previously been achieved but there have been few reports of the synthesis of mesoporous rhodium catalysts.

The use of a soft template is considered a robust platform to prepare various types of metallic nanoparticles and nanostructured films with uniform mesoporous architecture,

Because rhodium is characterised by stable, closely packed atoms, it is less reactive chemically under mild conditions.

The investigators overcame this challenge by their selection of polymer precursor, reduction agent and mixing solvent. 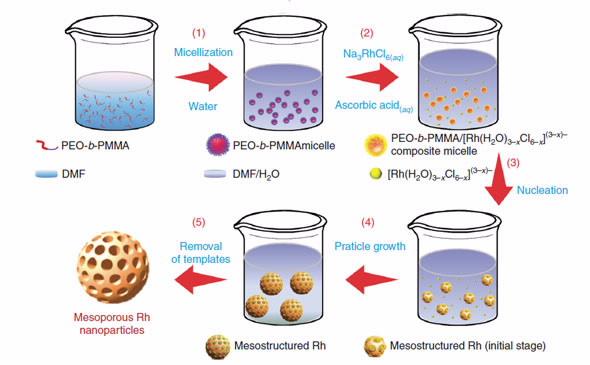 “Because the polymer molecule is defining the pores, it opens up the possibility of changing pore size or other modification to tune the final product,“ said Wood.

Quokka measurements also indicated that the micelles did not change shape after the addition of the metal precursor, which was an important consideration.

Transmission electron microscopy was also used for a visual characterisation of the micelles.

Low angle X-ray diffraction provided detailed information about the pores; confirmed the openings were uniform in size and closely packed and suggested the particles were purely metallic.

The investigators also gained insight into the atomic mechanism that contributed to the formation of the mesoporous structure.

Ultraviolet-vis absorption spectroscopy suggested the dissolved metal ions coordinate to the micelle surface and drove the nucleation of the rhodium precursor.

The study found the nanoparticles retained their shape and structure in temperatures up to 400°C and would perform well as catalyst for the removal of nitrogen oxide from lean burn exhaust containing high concentrations of O2.