A study led by ANSTO groundwater experts has provided much-needed, quality-assured information about the origins, interactions and vulnerabilities of key groundwater resources in Maputo District of Mozambique.

“It opens up the possibility of acquiring similar datasets at a reasonable cost in other regional areas of the world, where there is very little groundwater information,” said ANSTO hydrogeochemist Dr Dioni Cendón.

In a paper published in Quaternary International, a large team led by Cendón, reported that intense rainfall during the wet seasons was the source of groundwater recharge and not water flowing from distant mountain ranges.

“Despite a limited data set, when it was combined with some existing data, we were able to detect variations in the hydrochemistry of groundwater and make a basic assessment of the vulnerability of the aquifers,” said Cendón.

A range of stable and natural radioactive isotopes are used in groundwater studies, including isotopes of oxygen and hydrogen, carbon, strontium as well as radiocarbon and tritium.

“Using tritium and carbon-14, we determined that groundwater recharge is likely to take place over decadal time scales.

“Knowing residence time allows local managers to determine how much groundwater they can take without mining the resource. 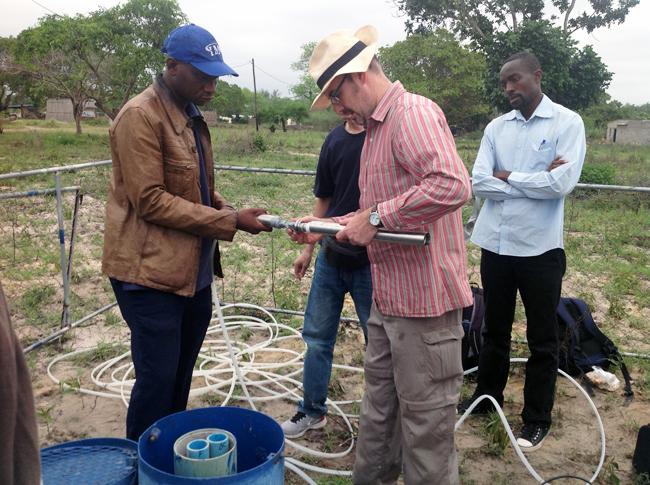 (left to right) Salif Kone from Mali, Dioni Cendon and Jean-Mweze of the Democratic Republic of the Congo collecting groundwater samples.

“It also provides a baseline for further sampling studies.”

Data was collected during a training session held in Mozambique in 2014 for international hydrogeochemists, which was led by Cendón and funded by the United Nations and other international organisations.

“In our fieldwork, we acquired very good quality water samples from four wells, which were part of a groundwater monitoring network of wells established by the local government in 2011.”

When Cendón started the isotopic analyse at ANSTO, he realised he needed more context for the interpretation. This resulted in a literature search and the acquisition of some additional data; in particular, a Master’s thesis by, Guilherme Nogueira, who was a student at the time in the Netherlands.

Only 45-62 per cent of households in Maputo District have access to piped water. The region relies heavily on small scale independent groundwater suppliers to satisfy the demands of one of the fastest-growing cities in Africa.

The area is subject to significant flooding events from typhoons.  Maputo uses pit latrines and septic tanks for sanitation and has large point sources of pollutants like landfills only 10 kilometres from the city centre.

“Sampling sites were not near heavily polluted areas, although there is a large landfill to the south of the area where we retrieved groundwater,” said Cendón.

The geohydrology of the city area also poses some potential challenges from salinity. Maputo is on the coast, which is characterised by very porous extensive sand dunes.

The northern areas have impervious layers of clay in-depth, which can protect the deeper groundwater sources from pollutant infiltration.

Local aquifers are found at a shallow depth in the sand dune systems. The groundwater reserves here can be close to seawater intrusion or to pollutant sources.

When you take into account, the large recharge rates through the sand, thinning confining layers along the coast, there is a significant threat from pollutants.

The concentration of nitrates in some groundwater is many times higher than the levels set by WHO.

A number of the participating researchers, some of whom were locals from Maputo province are co-authors on the paper.

More sampling is underway to make further assessments of the risk of salinity in association with some collaborators in the Netherlands.

ANSTO’s Stuart Hankin and Chris Dimovski assembled the maps for the paper.