Data collected on the macromolecular crystallography beamlines at the Australian Synchrotron has contributed to major research findings on two deadly viruses, Hendra and Nipah,  found in Australia, Asia and Africa.

The viruses can be transmitted to humans not directly by the bat which is the natural carrier but by an infected animal like horses or pigs. 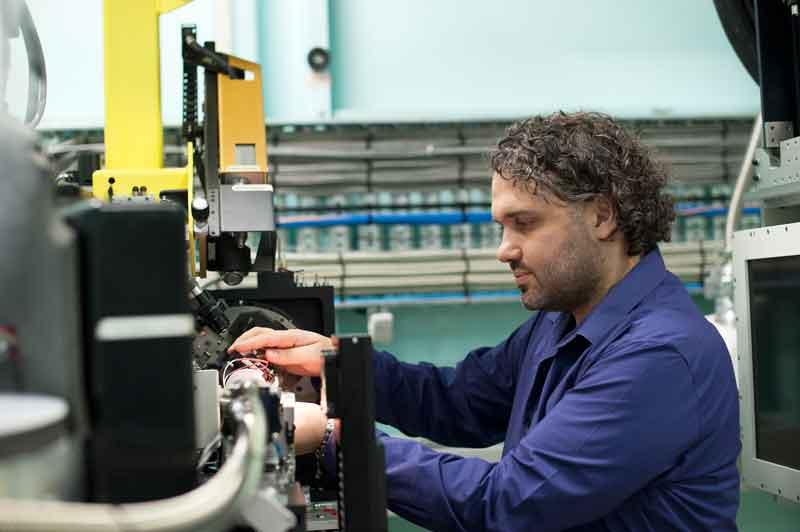 Beamline scientist, Dr David Aragao (pictured above), a co-author on the paper in Nature Communications, said that obtaining a clear motion picture of key biological process at the molecular level of viruses is often not available with current biomedical techniques.

“However, using X-ray crystallography from data collected on both MX1 and MX2 beamlines at the Australian Synchrotron, we were able to obtain  8  ‘photograph-like’ snapshots of the molecular process that allows the Hendra and Nipah virus to replicate.“

Two authors of the paper, PhD students Kate Smith and Sofiya Tsimbalyuk, who are co-supervised by Aragao and his collaborator Professor of Biochemistry Jade Forwood of the Graham Centre for Agricultural Innovation Charles Sturt University, used the Synchrotron extensively collecting multiple data sets that required extensive refinements over two years to isolate the mechanism of interest.

High throughput screening of potential variants of the nuclear transport receptor importin α were undertaken on MX1.  Data collected on MX2 with the ACRF detector enabled the researchers to identify structural differences in the interaction of a key protein, W protein with variants of importins α on the nuclear membrane.

Dr. Aragao used an analogy to explain the complex molecular interaction.  In order to hijack the human cell fabricate new virus, the virus must make its DNA penetrate the nuclear membrane. Some virus also breaches that line of defence with other molecules that block immune defences of the host.

It was known that viruses can use proteins to get inside the nucleus but the exact mechanism for each protein is not well understood.

“You can think of the membrane as similar to the walls of a house, where you gain entry to the house by a door. Specific molecules on the surface of the nuclear membrane act like doors which will only admit access very selectively.”

“In this case, W protein is allowed access to the nucleus by binding successfully with importin α3, which act like doors permitting entry,” explained Aragao.

“Interestingly, importin α3 is the same nuclear receptor that the HIV virus uses to gain access to the cell nucleus.”

Additional insights from the research revealed that once inside the nucleus, W protein blocked some of the host cell’s DNA that was crucial to a successful immune response to infection.

“W protein can block interferons, which generate proteins that are involved in attacking the invading virus.“

An understanding of these mechanisms opens up the possibility of impeding the W protein from blocking the interferon and immune response with a drug.

“This is a good example of how looking at uncommon disease can bring insights about more broad spectrum diseases like HIV,’ said Aragao.

Some of the work on the virus was undertaken because of the high death rate associated with infection.  Up to 60% of people infected with the Hendra or Nipah virus will not survive it.  This would a very dangerous scenario in the event the virus mutated to be more infectious and an epidemic occurred.

“By looking at the specificity of the interactions, we were able to understand the underlying mechanism at work in viral replication,” said Aragao, who has ongoing collaborations with Charles Sturt University.

The research team, in addition to  scientists from Charles Sturt University and the Australian Synchrotron, included the Center for Microbial Pathogenesis at Georgia State University in the United States and La Trobe University.