ANSTO is acting as a convenor in bringing together Australian and Sri Lanka researchers, organisations and expertise to explore chronic kidney disease of unknown aetiology (CKDu), a major health problem in Sri Lanka and other parts of the world. Aetiology refers to the factors which produce or predispose a person to a certain disease.

ANSTO representatives, including CEO Adi Paterson, were part of a delegation that travelled to Sri Lanka in early November to advance collaboration with the Sri Lankan government.

During a week-long program, the group met with key stakeholders in Colombo, Anuradhapura and Kandy, and facilitated a workshop for Sri Lankan researchers and experts.

At the workshop, over 50 Sri Lankan participants worked together to formulate an action plan to advance the project over the short term.

"In addition to planning, it was an opportunity for our group to travel to the areas where the disease affects significant numbers of people. Seeing local conditions and meeting key stakeholders brought insights that enriched our understanding of this complex disease." said Paterson.

The outcomes of the approach taken by ANSTO are expected to be relevant globally, including vulnerable populations in rural and remote Australia, who also experience higher levels of kidney disease.

More than 20 potential causes of CKDu in Sri Lanka have been identified in previous research over many years by contributing local and international research groups, including the World Health Organisation (WHO).

Deciphering the multifactorial nature of the disease development has proven to be very challenging. 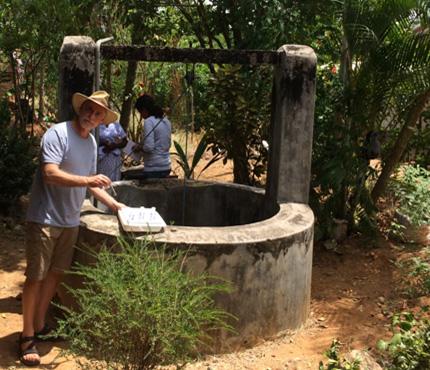 “We suspect there might be a nexus between certain environmental conditions that reduce resilience and exposure to possible pathogens or contaminants,” said ANSTO biomedical scientist Prof Richard Banati (pictured above looking at a domestic well) .

“To answer this question one must look at some of the broader determinants of health, such as nutritional status, access to clean water, and food production in an area where subsistence farming is important. It is also well known that climate change will hit developing countries the hardest.”

“We bring together experts in kidney disease with ANSTO’s technical competencies in measuring specific components, such as water and contaminants, within the complex eco-systems that underpin population health.”

“While we are guided by hypotheses, we take a neutral approach at this stage until there is greater clarity,” said Banati.

“However, the affected communities and the experts are in agreement that early recognition and refinement in the diagnosis, as well as prevention of further disease by immediate improvements in the provision of clean drinking water and good nutrition are of the highest priority,” he said.

ANSTO’s expertise in the analysis of surface and groundwater using isotopic techniques will provide quantifiable data on the source of drinking water and measurements of contaminants.

The population that is most affected by CKDu is known to use well ponds as a source of drinking water.

Environmental researchers from the Queensland Univerity of Technology (QUT) took samples from these domestic well ponds back to ANSTO for analysis.

Some of the drinking and irrigation water is captured in a partially remaining or re-established ancient system of storage lakes dating back 2000 years. Future work needs to look into the replenishment mechanism of these wells and ponds through ground or surface water.

According to the WHO, individual agrichemicals used in the area for farming do not fully explain CKDu, but synergies between them and other risk factors could play a role in causation.

There are speculations that relatively lower doses of contaminants in food may damage the kidneys of individuals in the presence of other risk factors, such as malnutrition or low birth rate or other diseases, such as diabetes.

ANSTO Human health researchers have expertise in investigating the links between food quality and metabolism that lead to disease.

The other area where ANSTO has a key role is as the producer of technetium-99m, the radioisotope that is the gold-standard nuclear imaging isotope to diagnose kidney disease. Early diagnosis is the key to preventing kidney failure.

“If you can control the progression of disease by providing treatment early, you may have a much improved outcome,” said Banati.

ANSTO’s integrative approach is based on prevention and early intervention strategies.

Other Australian organisations will be looking at other aspects of the problem. For example, the George Institute for Global Health will provide epidemiological information.

To date, 11 Australian universities, PFRAs and enterprise, along with a further 11 Sri Lankan institutions and 4 multilateral organisations have registered their interest in collaborating on the project.

ANSTO signed an MOU with Sri Lanka to address CKDu in May 2017.