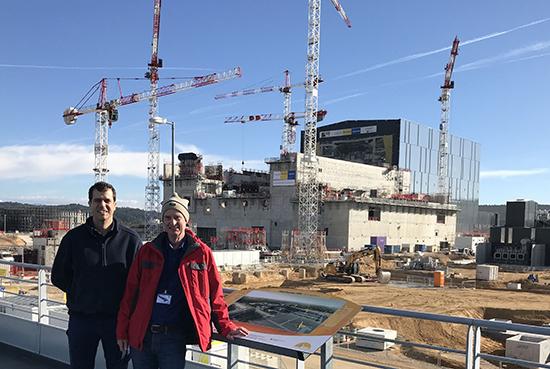 In an ABC interview with Antony Funnell for “Future Tense” recorded before the COVID-19 crisis escalated, Dr Richard Garrett, ANSTO’s official representative to the project, provided some highlights of Australia’s involvement and answered some questions about the current status.

Despite some initial delays and challenges, the project is now on schedule and on track for first plasma in 2025.

In the ITER project, fusion will be achieved by joining the nuclei of very small atoms, deuterium and tritium, at extremely high temperatures, up to 150 million degrees Celsius, to create energy in a self-sustaining reaction.

Fusion energy has all the advantages of fission energy without any of the drawbacks, such as radioactive waste, plentiful fuel and a very high energy density, as explained by another guest on the program, physicist David Kingham.

Garrett points out that Australia had a history of fusion research dating back to the 1960s, including the construction of a series of tokamak reactors at the ANU.

Diagnostic technologies allow you to measure all aspects of the state of the plasma, which is held in place by a powerful magnetic field, while the reaction is being maintained.

ANU developed a technology that provides a way to create images of critical areas of the plasma at the highest temperatures.

Garret said this was crucial if the technology was going to work.

Although Australia is not a financial member of ITER, it signed a technical cooperation agreement that enables the Australian research community to contribute to the project and share in the success of its achievements.

This multinational collaboration draws together the ‘best of the best’, according to Funnell, to produce clean fusion energy in a research reactor.

Although fusion energy has been promised for many years, it has proved extremely difficult to achieve: the devil is in the detail, said Garrett.

ITER is building on a long series of earlier experiments that looked at the temperature of the plasma, the creation of impurities, magnetic fields, and other critical parameters.

The development and production of hundreds of thousands of kilometres of superconducting cables for ITER is an engineering feat in itself and has spillover benefits for industry.

Will ITER achieve its goal of using 50 MW of power to produce 150 MW of energy?

Based on what has been achieved so far, Garrett is optimistic

In a newsletter issued this week, ITER announced it had reached an important milestone, despite the constraints imposed by the public health crisis.

ANSTO signed a cooperation agreement with ITER to enable Australia to engage with and benefit from participation in the world’s largest engineering project to create fusion energy.