ANSTO has produced a comprehensive report for the NSW Department of Planning and Environment (DPE) that represents a significant scientific investigation of the connections, pathways and processes of water loss from the Thirlmere Lakes system.

The lakes, which have both historical and contemporary significance to Aboriginal people, are currently full of water but in the study period from 2017 until 2020 the surface waters of the five lakes dried out completely during the drought.

Through DPE, the NSW Government funded a comprehensive research program commencing in 2017 and concluding in 2020 in response to community concerns about the low water levels in Thirlmere Lakes, which have ranged from full to dry at different times in the past.

The research determined that reduced inputs, including lower rainfall and declining water tables adjacent to the lakes relative to historical levels, were both likely to have contributed to low lake levels prior to and during the study period.

Lake Baraba was found to be the most resilient of the lakes during drought and appeared to have been better supported by relatively unexploited  groundwater in the less developed landscape to the south and west.

Most of the losses of lake water were attributed to evaporation and vegetative transpiration (where plants take up liquid water from the soil and release water vapor into the air from their leaves).

However, isotopes identified groundwater as a critical factor impacting lake surface water levels and every lake showed evidence of multiple loss mechanisms, including recharge to groundwater (the proportions of which were different for each lake and its stage of drying).

The surface water within the lakes followed the same decline rates as the reduction within underlying groundwater aquifers.

The research showed that there was a lack of significant flow connections at the surface between the lakes during the period, although some slow connections to groundwater persisted.

There was no chemical or isotopic evidence linking groundwater in the nearby Illawarra Coal Measures mine to surface waters from the lakes during the study period; however, there was evidence a tiny component of younger water was reaching the mine, potentially from mine shafts and operations.

As stated, because groundwater was identified as a critical factor impacting lake system surface water levels, ANSTO’s research concluded that limiting the regional drawdown of groundwater could slow or prevent recurrent dry periods.  Elevated regional groundwater levels can favour discharge into lakes and contribute to increase lakes viability for longer, than would otherwise occur with only rainfall contributions.

The tools used to study groundwater

Stable water isotopes were a key resource in determining the evaporation rates for the lakes.

Field work to sample rainfall and surface water carried out over a three-and-a-half-year period produced over 10,000 analytical results in the study. The team also collected additional physico-chemical measurements and samples to allow ultra-trace level analysis of rare earth elements.

The hydrogeochemical and isotopic information was acquired using stable isotopic ratios and chemical analysis with radioactive isotopes including , tritium, carbon and chloride for selected samples .

"This work was made possible by the expert analytical scientists in our stable isotope, tritium, C-14 and elemental laboratories, who delivered a unique set of high quality data to support the project," said Dr Catherine Hughes,  Acting Leader, Isotope Tracing in Natural Systems.

“The study was to understand the processes acting as drivers to dry out the lakes but the research opens our eyes to the way we could protect lakes or other sites in NSW. Any site in the Greater Sydney basin  where irrigation or mining activities affect water resources could be impacted in a similar way. “Maximising groundwater storage minimises the impact of increased evaporation and transpiration.

“It was totally unexpected that that we had to look at such a small scale to really understand the processes of lakes that are co-located,” said Dr Cendón.

“All of the lakes were behaving differently. Despite common drivers, small variations in groundwater behaviour were behind large charges in the viability of the lakes.

“Unless you look at the geochemistry in making your assessments of groundwater-dependent ecosystems, you will not get an accurate picture.”

“During our study period, we had only two short windows when there was significant rainfall. Most of time, the lakes were disappearing before our eyes. We wanted to know what happened to the landscape under very different conditions ,” said Dr Peterson.

“Were the lakes interconnected? Did they flow into each other?”

Using kayaks, the group traversed the lakes and were astounded by the transformation.

All lakes were full and connected.

“It was an extraordinary sight,” he said. “We were pleased to see the lakes had filled to high levels, but are concerned that they remain susceptible to drying if groundwater levels continue declining.” 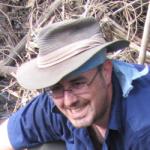 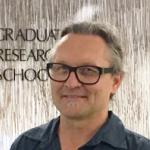