As the emitted charged-particle reaction products exit from the material, the NRA method is most sensitive to the region near the surface. By measuring the energy spectrum of the emitted charged particles, a concentration versus depth profile can be obtained for selected elements in the near-surface region.

Nuclear Reaction Analysis (NRA) has been applied predominantly to problems in materials science. The use of isotopically- enriched compounds allows the profile of a specific element to be targeted by ion beam reactions using its isotopes.

For example, in the thermal oxidation of silicon, the growth kinetics and diffusion of oxygen across the Si/SiO2 interface region has been studied using sequential oxidations in natural and 18O enriched oxygen gas. This isotopic specificity of NRA allows the differentiation between possible reaction pathways.

The same technique as used in materials science has also been applied to help solve environmental questions.

Many endangered Australian animals inhabiting the arid zone are faced with long periods of poor or inadequate nutrition during periods of low or no rainfall. They depend on the efficient utilisation of their stored body reserves for their survival. 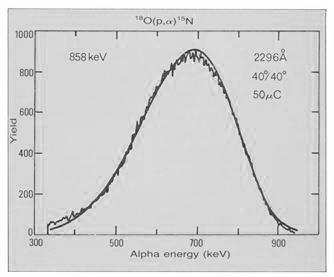 Figure 1  A typical alpha spectrum obtained using this technique for a 98 atom %, 18O enriched Ta2O5 sample 0.23µm thick. The solid curve is a computer fit to the data and allows a 180 depth profile to be obtained as well as its concentration

An understanding of their caloric usage is essential for determining their energy and protein requirements. This data may then be correlated with the measured availability of natural resources, and help provide guidelines for wildlife managers in developing effective conservation strategies.

By measuring the loss of the stable isotopic tracer 18O from the animal as a result of isotopic exchange with the environment, the rate of production of carbon dioxide can be estimated, and thus the metabolic rate of the free-ranging animal. This information enables the quantification of the animal's energy requirements.