As well as natural variability in climate, humans have been altering the Earth's surface at an increasing rate. Changes commenced with the global migrations of human populations from Africa across Europe, Asia, and the Pacific over a few hundred thousand years ago and has intensified over the past few tens of thousands of years.

The application of microgram radiocarbon dating and new long-lived radionuclide dating techniques, both pioneered at ANSTO are being applied to the Australasian regional migration histories, human evolution in South Africa, and significant achaeological artefacts.

There is a special focus on Australian Aboriginal rock art at multiple sites, including the Kimberly and Kakadu regions.

On a shorter time scale, environmental researchers investigate the impacts of the arrival of Europeans in Australasia and Polynesians in New Zealand. 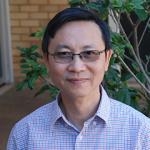