Proton elastic scattering (PESA) is ideally suited for measurement of hydrogen concentration in thin samples, such as aerosols. An example of PESA spectrum of a thin aerosol sample deposited on Teflon filter is shown in Figure 1. 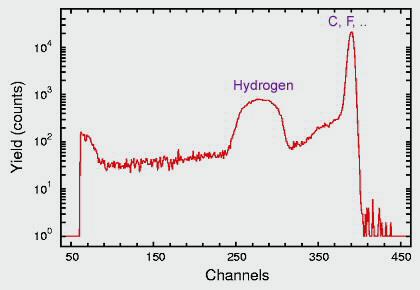 Figure 1 PESA spectrum of elastically scattered protons in the forward direction (scattering angle 30o) from the thin Teflon filter loaded with ambient aerosol. The broad peak is due to forward scattered protons from hydrogen in the aerosol sample and the right-hand peak due to scatteringfrom all other elements, primarily carbon and fluorine.