With conventional Elastic Recoil Detection (ERD) all elements lighter than the incident ion are detected and all other elements blocked by the stopper foil. Using a heavier mass incident ion beam allows a multitude of other different elements to be recoiled forward and detected.

At ANSTO, RToF detector is installed on the ANTARES tandem accelerator. A high energy, heavy ion beam, typically 77 MeV iodine, is used to recoil elements out of the material, and into the spectrometer.

The forward recoiled target atoms travel down the spectrometer tube and through two thin carbon foils, which are separated by about 50 cm. As the recoiled atoms pass through each of the carbon foils, a burst of secondary electrons is produced, which is then collected and amplified to produce at fast timing signal ~ 1 ns wide.

The time separation between these two timing signals is a measure of the atom?s speed. The recoiled atoms then come to rest in a silicon detector, which measures their energy. From these two measured quantities of speed and energy, the recoiled atom?s mass is uniquely identified. From the determined masses, and their measured energies and yields, elemental concentrations and profiles can be constructed for the sample.

RToF spectrometry is a powerful technique for profiling multilayered, multi-elemental samples and thin films as may be found in the microelectronics industry.

As an example, measurements have been made of the ferroelectric barium strontium titanate Ba0.7Sr0.3TiO3 (BST). This ferroelectric material has a very high dielectric constant, and is being developed for use in dynamic random-access memory chips as the storage capacitor dielectric. High memory density demands small device sizes.

Work is required to optimise the configuration of the BST films for maximum electrical performance and reliability. ToF recoil spectrometry measurements have been used to map the change in the elemental profiles of a proposed BST device when subject to a heating step in the manufacturing process - see Figure 2. 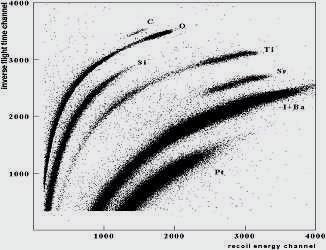 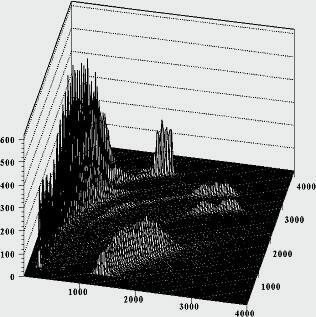 ﻿Figure 3  Three-dimensional projection of the spectrum shown in fig. 10, showing in better detail, the relative elemental yields obtained from the sample structure. The I+Ba curve has been removed to un-hide the Ti and Sr data.

The mass separation of target elements is obvious from this bi-parametric display. Relative concentrations and profiles are more clearly seen in Fig. 3, where redistribution of certain elements is noted. Oxygen has diffused through the platinum oxidising the Ti and Si, and strontium has segregated in the BST layer. 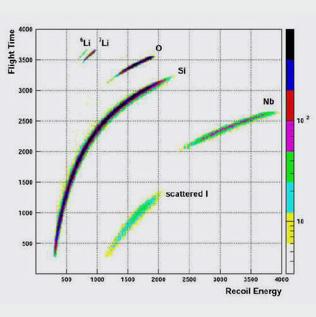 As another example, in Figure 4 above, RToF measurements are shown of a thin (~ 100nm) lithium niobate film LiNbO3 deposited on a silicon wafer by Atomic Layer Chemical Vapour Deposition. Lithium niobate is an important material used in optical-acoustic devices in silicon integrated circuit technology.

The RToF spectrometer produces mass-separated spectra of the elemental constituents in material under investigation, as well as their location and distribution. In the figure to the left, the mass resolution of the spectrometer is sufficient to resolve the two isotopes of lithium, 6Li and 7Li. The niobium and oxygen in the thin film as well as the silicon substrate material are seen.

Such data provides important information about the film stoichiometry, homogeneity, surface and interfacial properties, necessary to engineer the film to the desired functional properties.