Opened by the Prime Minister in 2007, OPAL is one of a small number of reactors with the capacity to produce commercial quantities of radioisotopes. This capacity, combined with the open pool design, the use of low enriched uranium fuel and the wide range of applications, places OPAL amongst the best research reactors in the world.

While OPAL is the centrepiece of ANSTO's research facilities, the suite of neutron beam instruments housed next to the reactor building and operated by ANSTO’s Centre for Neutron Scattering represent a significant addition to ANSTO's research capabilities.

The role of research reactors

OPAL is one of a number of similar production facilities around the world, including the Safari-1 reactor in South Africa and the HFR reactor at Petten in the Netherlands .

These reactors play a vital role in society by functioning as 'neutron factories', producing radioisotopes for cancer detection and treatment, and neutron beams for fundamental materials research.

OPAL's operation staff cooperate with their international colleagues in sharing information and knowledge both directly through formal collaboration agreements and via various international organisations and forums.

OPAL is used by members of the scientific, medical, environmental and industrial communities, as well as Australian Universities.

While OPAL is extremely versatile, and the uses of neutron science are virtually unlimited, OPAL's main uses are:

OPAL typically operates in cycles of 30-35 days followed by a short refuelling outage to remove three spent fuel assemblies and replace them with new fuel assemblies.

During these types of outages, the OPAL team also perform maintenance and undertake a series of inspections and surveillances.

In addition, there are longer scheduled maintenance periods to enable more extensive inspections and refurbishments of the reactor.

ANSTO aims to operate the reactor for 300 days each calendar year. 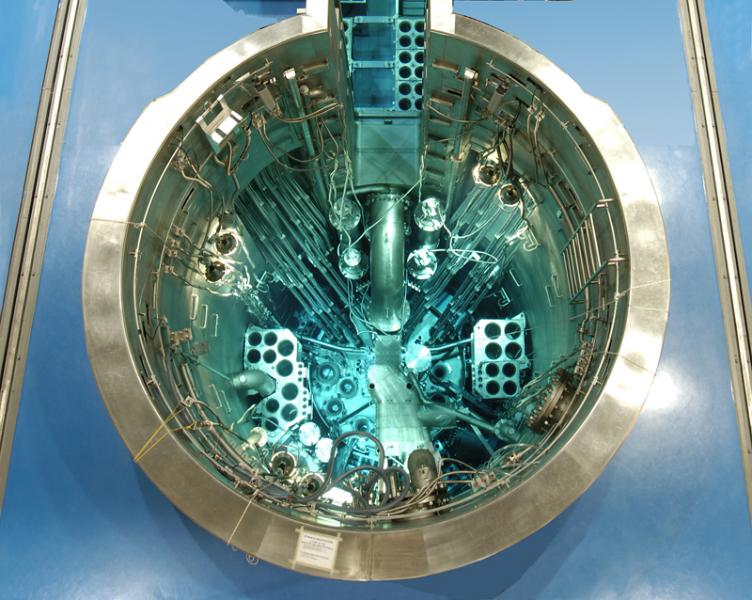 The heart of the reactor is a compact core of 16 fuel assemblies arranged in a 4x4 array, with five control rods controlling the reactor power and facilitating shutdown. OPAL uses low enriched uranium fuel containing just under 20 per cent uranium-235.

In terms of security and nuclear safeguards, this is a distinct advantage over earlier research reactors, some of which required enrichment levels as high as 95 per cent uranium-235.

OPAL's fuel assemblies (core) are cooled by purified water and are surrounded by a zirconium alloy 'reflector' vessel that contains a special type of water called heavy water. The reflector vessel is positioned at the bottom of a 13-metre-deep pool of light water. The open pool design makes it easy to see and manipulate items inside the reactor pool.

The depth of the water acts as a very effective radiation shield. The heavy water maintains the nuclear reaction in the core by 'reflecting' neutrons back towards the core.

Come and discover the world of nuclear science at ANSTO 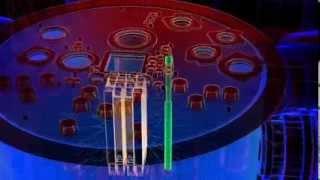 During fission, energy is released, some of which is carried away by neutrons released from the atom. These neutrons are what the scientists and engineers use for neutron beam research and the irradiation of materials.

Two or three high energy neutrons are produced when a uranium-235 atom fissions. In order for fission to support a chain reaction, the neutrons need to be moderated (slowed down) and reflected back into the fuel.

The story of OPAL began in 1997 when the Australian Government announced it would fund the construction of a research reactor to replace the country’s first reactor.

It was decided to build the replacement reactor on the same ANSTO site taking advantage of the area’s sound geology and site infrastructure.

On 13 July 2000, ANSTO signed a contract with the Argentine company INVAP S.E  and its Australian alliance partners, John Holland Construction and Engineering Pty Ltd and Evans Deakin Industries Limited, for the design, construction and commissioning of OPAL. ANSTO managed the overall design and construction process.

INVAP was the prime contractor, undertaking the design, procurement, installation and supervision of the commissioning and performance demonstration of OPAL.

OPAL demonstrated its ability to comply with the most stringent health, safety, security, environmental and quality assurance standards before the operating licence was granted.

OPAL was officially opened in April 2007, the dawn of a new era for Australian science.

In April 15, 1953, Australia entered the nuclear science arena, when the Atomic Energy Act came into effect. The Australian Atomic Energy Commission (AAEC) followed and in 1987 the AAEC evolved into the Australian Nuclear Science and Technology Organisation (ANSTO) as it’s known today.

How safe is OPAL?

The OPAL research reactor's design and integrated safety features mean it is extremely safe; a fact confirmed by independent analysis. It performs a wide range of functions, including the production of radiopharmaceuticals for nuclear medicine, and the provision of neutron beams for research.

ANSTO operates Work Health and Safety and Environmental Management Systems designed to ensure the safety of its employees, partners and members of the public to minimise the impact of our activities on the environment.

of radioisotopes in nuclear medicine