In 2014, commissioned a major new option on our Taipan thermal-neutron 3-axis spectrometer, namely a beryllium-filter secondary spectrometer option, dedicated to molecular-spectroscopy studies.  In the most part, this is useful for studying normal modes in hydrogenous molecules, and the method complements optical spectroscopy methods like infra-red and Raman spectroscopy. 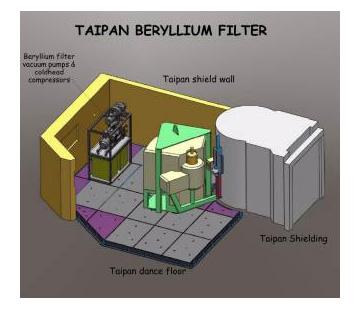 As in the normal, triple-axis spectrometer the incident neutron energy is determined using a large focussing crystal monochromator, but rather than using a similar analyser crystal, we use a large assembly of cooled polycrystalline beryllium transmission filters, which only allow very low-energy neutrons through.  In order to clean the signal up further, there are additional filters of graphite and bismuth.

The advantage of this method is that one can collect a vastly increased solid angle of scattered neutrons from the sample, at the expense of having more constrained dynamic range in Q.  The latter does not matter very much for non-dispersive modes like those in molecules, or in the measurement of powder-averaged densities of phonon states in solids.

Our Be-filter option on Taipan, is closely modelled on the BT-4 Filter Analyzer Neutron Spectrometer at NIST, albeit with some improvements, and we are very grateful to our colleagues at the National Centre for Neutron Science at NIST for their substantial advice and assistance.

This project received substantial external funding in 2009 from the Australian Research Council, via a $400k LIEF Grant submitted by AINSE, with the additional support of 8 Australian research organisations (UNSW, Griffith U., Sydney U., U. of Wollongong, Curtin U., UWS, U. of Melbourne and ANU).  In fact the contributions from these universities bring the inward investment to this project at OPAL up to approx. $1M.

View the instrument schedule at the Australian Centre for Neutron Scattering.