Researchers from the chemistry group of Prof Ivana Evans at Durham University have used neutron techniques at ISIS Neutron and Muon Source, ILL and ANSTO with other methods to characterise the structure and conductivity of a novel oxide-conducting perovskite.

Because of their electrical properties, oxide-ion conductors are used as components of solid oxide fuel cells (SOFC) converting chemical energy directly to electricity.

They are unique in that they can be used for a wide range of applications, from generating power for satellites and space capsules, to powering fuel cell vehicles like automobiles, buses, or boats, to generating primary or emergency backup power for buildings. 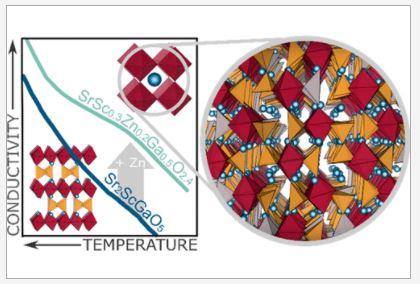 The investigators found that the material Sr2Sc1–xZnxGaO5–0.5x showed a significant increase in oxide-ion conductivity compared to the parent composition Sr2ScGaO5, caused by the change in structure—supporting a high level of oxygen deficiency and disorder across a wide temperature range.

Materials with the general chemical formula A2B2O5 can adopt an oxygen-deficient perovskite-type structure. In this structural form, the oxide vacancies are often ordered in a way that limits the conductivity through the material. For example, the material Sr2ScGaO5, previously characterised by the same group using neutrons at ISIS and ILL, is only a modest oxide ion conductor.

By introducing small quantities of zinc (Zn) into the structure, this conductivity can be improved significantly.

Adding Zn introduces oxygen defects that increase the number of tetrahedrally-coordinated metal sites compared to the 1:1 ratio of tetrahedra and octahedra in the parent material.

In this study, published recently in the Chemistry of Materials, the researchers combined these approaches to form Sr2Sc1–xZnxGaO5–0.5x, where x = 0.1–0.6, and studied the effect of these changes on the structure and oxide dynamics.

“The study was very well suited for the neutron diffraction experiments carried out at ANSTO. The highly penetrating power of neutrons allowed us to use a complex sample environment to collect data under conditions similar to those found in the real-life operation of these technologically-important materials, such as the studied oxide,” said co-author Avdeev, who is Manager of the Neutron Diffraction Group at ANSTO.

“We were able to collect data up to 900 °C, which provided evidence that the structure of the material remains stable across the entire temperature range we tested; a property that is essential for potential industrial applications,” said Avdeev, who has extensive experience in characterising this type of materials.

The work determined that SSZ40GO formed a highly disordered perovskite structure with remarkably low oxygen content. It also showed an increase in conductivity more than a hundred times greater than the parent material Sr2ScGaO5 at high temperature.

They also found that the local structure of SSZ40GO is markedly different from the average perovskite structure.

Using the neutron total scattering data, they observed that the local environments around the metal ions include half of the tetrahedra with the unusual structural feature of a terminal oxygen site. They believe that this terminal oxygen could contribute to the higher oxide ion conductivity.

The study into the structure and dynamics of Sr2Sc0.6Zn0.4GaO4.8 included X-ray and neutron diffraction, neutron total scattering and pair distribution function (PDF) analysis, impedance spectroscopy, and neutron spectroscopy. The work is a part of the larger student project of the lead author Chloe Fuller.

Prof Evans spent six months on sabbatical at ANSTO in 2015 while co-supervising a PhD student Matthew Tate with Dr Garry McIntyre; an arrangement that helped establish the collaboration between Durham University and ANSTO and resulted in several other joint publications, including a paper in Advanced Functional Materials and a paper in Dalton Transactions on apatite type oxide ion conductors. 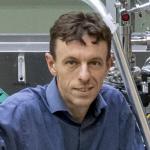 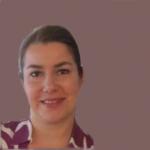 Creating a global energy system that is both environmentally and economically sustainable is unquestionably one of the largest challenges facing the scientific and engineering communities.