Nuclear Fuel Cycle researcher, Dr Yingjie Zhang, was among those identified by The Australian in its Research magazine as a national leader in his field.

According to the data analysis methodology provided by League of Scholars, Zhang had the most papers published in top 20 journals in ‘Crystallography and Structural Chemistry’.

Zhang, who has been working on radioactive waste management and actinide structural chemistry at ANSTO for more than 20 years, has a total of 1353 citations from 113 publications.

He was the only ANSTO staff member to make the list in 250 fields of research.

Zhang’s early work at ANSTO was on the development of Synroc waste forms and foundational studies on the use of hot isostatic pressing of treated materials within stainless steel cans. The method has been adopted and will be used in the Synroc-Molybdenum processing facility under construction at ANSTO.

In a paper chosen as the inside cover article in the New Journal of Chemistry, Zhang and co-authors reported on four new uranyl oxide hydroxy-hydrate phases with heavy lanthanide ions as the interlayer species.

Zhang’s research has relevance for nuclear fuels because they are based on a uranium oxide system related to the spent nuclear fuels as well as natural uraninite (UO2).

Although nuclear fuels during normal operation do not have the bulk composition necessary to form a primary uranyl phase, apart from the partial oxidation of UO2, phase evolution could occur during the long term storage of spent nuclear fuels.

“Understanding the structure and properties of uranium oxides under extreme conditions is crucial in the development of nuclear fuels,” said Zhang.

“It is also important because once spent nuclear fuel is disposed of, the uranium oxide undergoes alteration by hydrolysis and oxidation over time,” said Zhang.

The same weathering (oxidation and hydration) processes occur in the natural uranitite (UO2).

“In nature, the weathering of uranium oxide always goes to a layered structure but at the moment we don’t have much of an idea what happens between uranium oxide and the layered materials,” said Zhang.

However, it has proven extremely challenging to find examples of uranyl oxide hydrate phases, in which transition metal or lanthanide ions as fission products are incorporated into a layered structure, in the natural environment.

“People have tried for many years to find single crystals of these structures in nature, so using a synthetic analogue is an alternative way and a better option,” said Zhang.

Zhang and collaborators were building on earlier work in which two new uranyl oxide hydroxy-hydrate phases were synthesised under hydrothermal conditions using either cobalt or nickel with potassium ions.

The next step was to incorporate heavy lanthanide ions in these phases.

Hydrated uranium oxide was added to nitrate solutions each containing one of four lanthanides (terbium, dysprosium, holmium and ytterbium), and heated to 240°C over a 72 hour period, which produced four crystalline products. 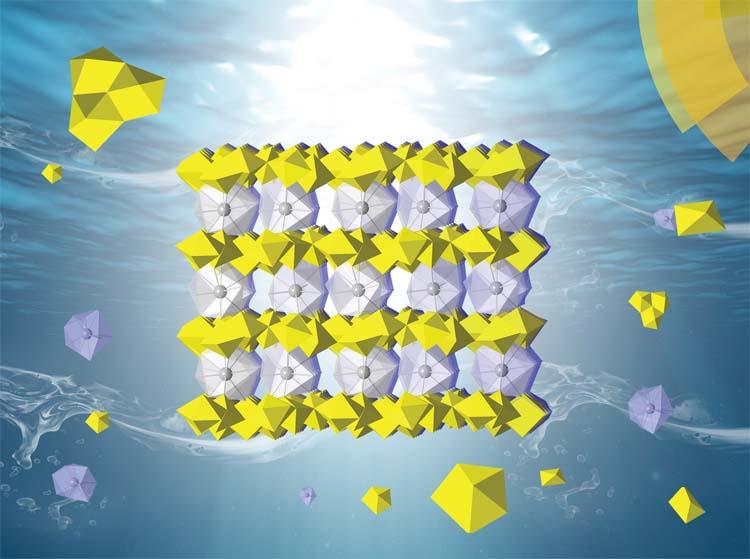 The trigonal crystal structures (pictured aboce) are constructed of the typical uranyl oxo-hydroxyl layers with the hydrated lanthanide ions as the interlayer species, primarily for charge balance.

Nanodomains with moderated structures and some preferential orientations were also identified.

A range of techniques were used for the characterisations, including powder X-ray diffraction, Raman and Fourier Transform Infrared (FT-IR) spectroscopies, various electron microscopic techniques such as selected area electron diffraction (SAED) as well as thermogravimetric analysis.

“We are absolutely delighted that his achievement has been spotlighted by the Australian Research Magazine and this very much reflects the calibre of research by our team that investigates the structural chemistries of both actinides and lanthanides.”

Zhang is now undertaking further syntheses and characterisations of these unusual uranium phases aiming to gain a clearer picture on the phase evolution from uranium oxides to these uranyl oxide hydroxy-hydrate phases.