Pelican is cold-neutron time-of-flight spectrometer (with polarisation analysis) and was the final instrument in our initial suite of 8 instruments funded in the OPAL construction project. Like the TAIPAN and SIKA 3-axis spectrometers, Pelican is designed to measure inelastic neutron scattering or to do neutron spectroscopy. While 3-axis spectrometers determine (and measure) the initial and final neutron energies using Bragg reflection from crystals, in time-of-flight spectrometers the neutron beam is pulsed using a rotating mechanical chopper and the neutron energies can then be measured simply by timing their arrival at the detector.

The downside of the method is that while 3-axis spectrometers take neutrons all the time, the chopper acts like a camera shutter and effectively turns the reactor off for 99% of the time, with a consequent loss of signal intensity.

There are two types of commonly used chopper, disc, and Fermi choppers, as used on our time-of-flight reflectometer and on Pelican respectively. On Pelican, we use both a focussing crystal monochromator and a Fermi chopper and this combination gives a pulsed mono-energetic beam of neutrons onto the sample in addition to getting the instrument out of the direct neutron guide.

There is intrinsically less information in the experiment, as there is an average overall crystal orientations, but the independence from single-crystal samples means that a much wider range of materials and samples can be studied. The fact that Pelican views the cold-neutron source means that it has quite good energy resolution (50 μeV and upwards to 1meV or so) and is good for high-resolution studies of diffusing molecules (diffusing both translationally and rotationally), molecules tunnelling between different orientational states and other large-scale motions of whole units within molecules.

To go to yet slower dynamics, one needs other types of neutron spectrometer (back-scattering, like our Emu spectrometer for 1-30 μeV) and neutron spin-echo for (0.001 - 1 μeV.

Time-of-flight instruments like Pelican have been incredibly productive scientifically, and represent a good first step into neutron spectroscopy for chemical, polymer and biological problems.

From the beginning, we planned to build Pelican in such a way that it can run with a polarised-neutron beam, and that the neutron polarisation can also be measured after the sample. This will be a "first" for a large time-of-flight spectrometer, and we might expect that the instrument will operate in this mode up to 30% of the time. We have taken a similar philosophy throughout the facility and 5 out of 9 of the instruments will be set up to operate in polarised mode.

The neutron itself, while uncharged, is a little magnet and its scattering properties depend on how this magnet is oriented with respect to magnetic fields in the sample. The neutron can scatter in two ways: (1) via the strong nuclear force from nuclei, and (2) via the standard dipole-dipole magnetic interaction with magnetic electrons in solids.

The main application of polarised-neutron methods is to separate nuclear and magnetic effects from each other definitively, for instance to determine whether extra diffraction peaks are due to a weak magnetic effect or to a subtle structural rearrangement of atom positions, or the distinguish phonons from magnons., and a diamond lattice structure formed by association of the tetrahedral clusters. 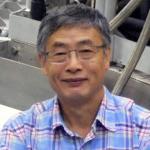 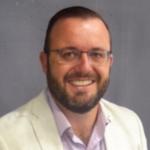