Some of the biggest current challenges for science replicated around the world are precipitated by the mounting pressure from members of the public and industry for low or no emissions energy technologies at an affordable price.

As a result, various publicly-funded areas of science and engineering, as well as some private sector companies, are in the process of aligning with these common goals or are investigating pathways to achieve these goals.

Guided by the recommendations of United Nations Intergovernmental Panel on Climate Change (IPCC) for energy production (less than 40t CO2/GWh), the current options for this transition to fully decarbonised, large-scale energy production, point to a mixture of renewables and nuclear, while phasing out fossil fuel sources.

Hydrogen is the most abundant element in the universe. Holding as much as three times more energy per unit of weight as gasoline, diesel or oil, it the potential to become the catalyst for a robust global industry.

It also presents one realistic prospect to decarbonise a number of other industries and, at the same time, to be scalable to meet the predicted global increase in energy demand. 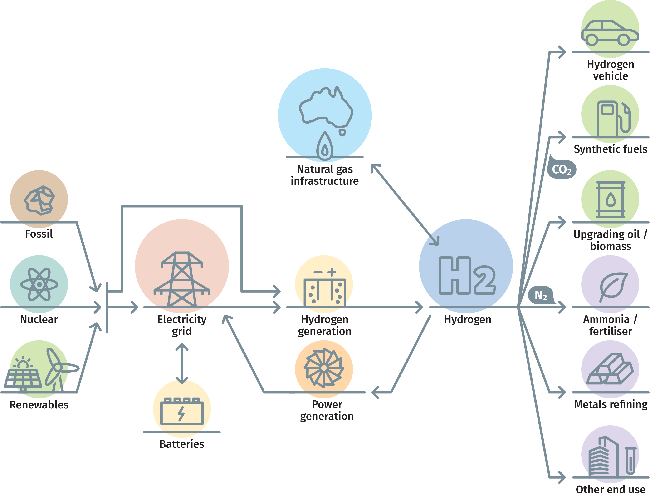 A particular detrimental consequence of the increased use of liquid petroleum gas in hydrogen production is that methane gas is released as fugitive emissions during extraction, transport, and use.  Because methane is 25 times more potent than CO2, as a greenhouse gas, this results in major setbacks for the overall decarbonisation effort.

There are a number of other technologies for hydrogen production, such as thermochemical cycles; for example, the sulphur-iodine process or the copper-chorine process. However, the high-temperature electrolysis (750 – 950°C) of water as steam is considered to be the most ecologically friendly and, therefore, the most desirable option.

Electrolysis splits water (H2O) into hydrogen (H2) and oxygen (O2) by passing an electric current through steam. The electricity for the electrolysis can come from any renewable or non-renewable energy-generation source; however, the choice of electricity source is important in terms of the real carbon footprint of a hydrogen-driven economy.

The main obstacle, which prevents the large-scale industrial application of high-temperature electrolysis, is the availability of cheap, carbon-free heat and electricity sources.

Renewable-based (solar, wind, and hydro) and nuclear-based energy generation systems are already well-known to be low-emissions electricity sources and, on that basis, have been considered for ‘clean’ hydrogen production.

The industrial-scale production of hydrogen is facilitated by large and concentrated energy sources.  This role can be played by the electricity grid or by large, stand-alone sources, such as hydro and nuclear.