ANSTO is about to commission a new beamline that will support space research relating to the impact of galactic cosmic radiation on astronauts among other applications.

The enclosed external ion microprobe beamline supplements ANSTO’s range of capabilities and expertise that can be used for space research as part of Australia’s fledgling space industry.

A small team at the Centre for Accelerator Science, which included Prof David Cohen, who conceived the project, senior research scientist Dr Zeljko Pastuovic,  senior instrument specialist David Button and senior mechanical engineer Michael Mann, have been working for two years to introduce a capability that will allow ground-based simulations of effects  produced by galactic cosmic radiation on human cells and living matter and other radiation biology studies. The new beamline will also cater for the rapidly evolving field of space electronics radiation testing and hardening in near future.

The existing heavy ion microprobe beamline on the Antares accelerator has been enhanced with a new system for extraction of the ion beam from the vacuum, where it is produced and focussed, into the enclosed external ambient of a new irradiation chamber. The new irradiation chamber was specifically designed and built to enable irradiations of cell cultures, tissue samples and electronics components.

The sample handling, exchanging, positioning, and viewing systems, as well as the mechanical and electrical controls, satisfy rigorous radiological and biological safety standards required for the irradiation of cells and living matter.

The new irradiation chamber with all equipment has been installed as the extension of the former microprobe beamline. Commissioning of the instrument will begin next month.

ANSTO researchers anticipate that the new beamline could be used for to test radiation hardened materials for electronics applications and dosimeters and micro-dosimeters.

“A relatively high-energy accelerator such as the Antares and its powerful microprobe beamline are needed to produce the focused beam of high-energy heavy ions with a required particle flux (dose rate) for irradiation. Then we need to bring this beam produced in a vacuum through a one thousand nanometre thin silicon nitride membrane into an ambient environment of atmospheric pressure and normal humidity where the cells or electronics are positioned for irradiation in a specially designed chamber to minimise energy loss of ions travelling through gas atmosphere before hitting the cells,” explained Pastuovic.

All technical work on the beamline was done in house by accelerator staff, who manage four accelerators at ANSTO.

“ANSTO has a long history of achievements and excellence in technical expertise using the accelerators, the new beamline will benefit Australian and international collaborators. In this case, the sky is not the limit,” said Cohen.

Although the impact of primary radiation has been studied extensively, little is known about the effects of secondary particles that are created when cosmic radiation interacts with the shielding on the International Space Station.

“The new capability will allow researchers to perform radiation biology experiments using a small number of heavy ions, such as iron or aluminium, with with particles of linear energy transfer and energies consistent with what is observed inside spacecraft.

This important dosimetry information applies to the environment of the space station or other space vehicle,” said biologist Nicolas Howell.

“It also adds to ANSTO’s considerable capabilities and expertise in the detection and measurement of radiation,” he added.

ANSTO announced the joint project following the signing of a strategic research agreement in May 2019.

“At the present time, we have to rely on studies from the application on radiation in a clinical setting. However, the doses and amounts of energy are different to the space environment. We expect this approach to be more representative of that setting,” said Ferlazzo, who was the recipient of a ANSTO-Australian Institute of Nuclear Science and Engineering (AINSE) scholarship supported by the French Embassy.

When high energy cosmic particles, like high energy protons, strike the spacecraft, they collide with atoms in its construction and shielding materials or any installed electronics. In these collisions they transfer a fraction of their kinetic energy to target atoms and produce secondary particles or nuclei fragments. Radiation damage or impact from these secondary particles can occur.

And while the dose of the secondary particles may not be that high, the cumulative effects or impact to humans and living matter from this radiation exposure over longer periods in space need to be further studied.

The new beamline can produce a focused beam of selected heavy ions with required energy to simulate the exposure of humans and living matter to secondary particles.

Ferlazzo said the experiments involve placing human cells (from established cell lines) on the beamline for irradiation, which can then be examined to determine DNA damage and repair.

There are many challenges in understanding changes to the body of a person in space. “It is quite difficult to determine if effects are caused by the microgravity environment or radiation,” said Ferlazzo.

“Another project is expected to start soon with the University of Technology Sydney to understand the combined effects of these two major space stressors,” said Ferlazzo.

"It is very important to return astronauts safely to Earth in good health and fully understand the effects of long periods in space." 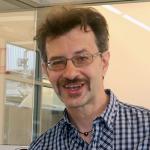 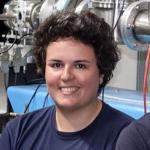 The high-energy heavy ion microprobe is used for the characterisation or modification of material properties at depths from approximately 1 micrometre to maximum depths of up to 500 micrometres from the material surface.

Understanding the full impact of radiation on astronauts

In collaboration with the French National Institute of Health and Medical Research (INSERM) and the French International Space Agency (CNES), ANSTO scientists are undertaking research on the radiobiological effects of secondary particles that are created when radiation interacts with the shielding on the International Space Station.