This is much larger than the equivalent volume for lab X-ray diffraction, and it typically takes of order 1 year from the original material discovery until crystals of sufficient size for neutron diffraction become available. Therefore, most important structural studies are done with either X-ray single-crystal diffraction or neutron powder diffraction, or both.

In the Laue method the crystal is illuminated by a very broad spectrum of wavelengths, and a large area of film is used to measure the arrangement of diffraction spots.

In the last 20 years, the Fuji film company has developed an electronic film or image-plate system that can be read and erased using lasers.  Soon afterwards, neutron-sensitive image plates were also developed, and our KOALA diffractometer uses a cylinder of such image plates, arranged with the crystal at its centre.

The broad-band radiation is provided by placing the instrument at an end-guide position.  KOALA is the second instrument of its type in the world, the only other being at the Institut Laue Langevin in Grenoble:  KOALA is predicted to be faster than the equivalent instrument in Grenoble, and its main competitive advantage is that it should be able to handle much smaller crystals (>0.1 mm3), and this may open up 100 times as many new materials for study.

Many of the most important functions, e.g. in catalysis, pharmaceuticals and functional biology, depend on just such hydrogen bonds.

There are also applications in a wide range of materials-science problems, including the new lightweight hydrogen-storage materials (alanates, metal-organic frameworks, etc.) that are under consideration for transportation applications as a substitute for hydrocarbons.

In summary, this is a niche area, albeit one in which Australia has a long and successful tradition, and in which we can be the best in the world.  The opportunity comes from the combination of the OPAL reactor, our high-performance front-end optics, the Laue camera itself.

Our instrument, located on a thermal guide, is focussed on applications to small-molecule crystallography and materials science, but if the same instrument (or a similar one) were to be situated on a cold-neutron beam, it would be capable of tackling protein structures.

Sample environments, Data analysis and reduction on the Koala instrument.

Applications, Recent Results and Publications on the Koala instrument. 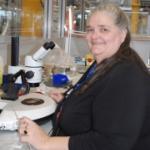