Nuclear techniques that can detect elusive hydrogen atoms are important methods in the characterisation of advanced materials.

Prof Mihail Ionescu used elastic recoil detection analysis (ERDA) to assist in an investigation of a new plasma coating developed by scientists at the University of Sydney and international collaborators to decrease bone implant rejections.

An expert in ion beam analysis techniques at ANSTO’s Centre for Accelerator Science, Ionescu has a long-standing collaboration with Prof Marcella Bilek in the School of Biomedical Engineering at the University of Sydney on the development of biomaterials.

In an acclaimed research development, led by Dr Benham Akhavan of the School of Biomedical Engineering at the University of Sydney, the group described a new organic coating technology that enhances the production of bone-producing cells allowing the implant to bind firmly to bone. Read the full University of Sydney report.

In a paper published in Applied Materials Today and featured on the cover, the investigators reported new insights into the role of energetic ion bombardment on growth mechanisms of plasma polymers by measuring the hydrogen content of the polymers using ERDA. 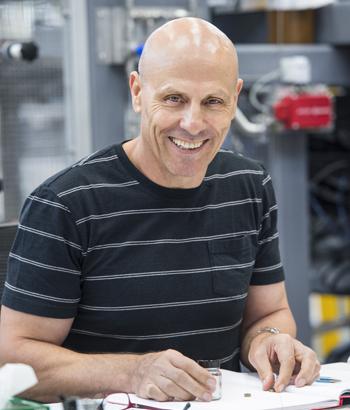 “The depth profile of hydrogen in thin polymer coatings reveals critical information about the biocompatibility of the polymer,” said Ionescu.

The technique, which is carried out using a beam of accelerated helium ions, is an effective method for measuring hydrogen in thin layers and in areas near the surface of a material.

Hydrogen is very difficult to detect and measure because it a small, light element with just a single electron and proton. It has weak bonds that are easily broken.

“When you are working with layers just a few nanometres, ERDA is an established technique.”

Helium ions fired at an angle towards the surface of the sample dislodge hydrogen atoms, and a detector can record the energy of the elastically-recoiled hydrogen atoms, which carry the depth information.

A Mylar filter is used to stop and block the scattered helium ions by the sample surface and reduce the noise, making it possible to extract the information carried by the recoiled hydrogen only.

The area of interest was the interface of the surface where the polymer film interacted with human tissue directly.

We were provided with samples that were processed in different ways under different conditions, presenting different hydrogen depth profiles over the first 100nm from the sample surface.

The investigative team included collaborators from the University of Sydney, the Heart Research Institute, Charles Perkins Centre, Sydney Nano Institute and ANSTO in Australia and the University Medical Centre, and Delft University of Technology in the Netherlands.

Note: Laue neutron diffraction on the Koala instrument can be used on crystals to determine the location of hydrogen atoms.

Elastic Recoil Detection Analysis (ERDA) is used principally as a method for measuring hydrogen in thin layers, and in the near-surface region of materials.

When an energetic ion beam hits a sample it will interact with the atoms through a number of very complex interactions. By detecting and measuring the reaction products resulting from the various interactions and their intensities, you can obtain quantitative data on the sample's constituent elements and their spatial distribution.